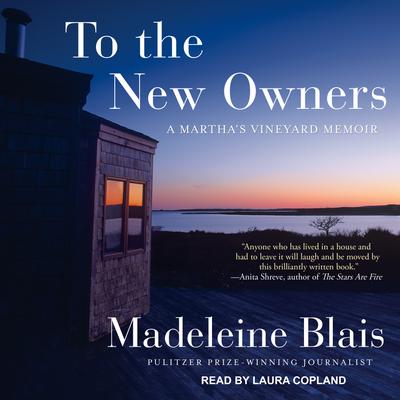 To the New Owners (Digital Audiobook)

In the 1970s, Madeleine Blais's in-laws purchased a vacation house on Martha's Vineyard for the exorbitant sum of $80,000. 2.2 miles down a poorly marked, one lane dirt road, the house was better termed a shack—it had no electricity, no modern plumbing, the roof leaked, and mice had invaded the walls. It was perfect.

Sitting on Tisbury Great Pond—well-stocked with oysters and crab for foraged dinners—the house faced the ocean and the sky, and though it was eventually replaced by a sturdier structure, the ethos remained the same: no heat, no TV, and no telephone. Instead, there were countless hours at the beach, meals cooked and savored with friends, nights talking under the stars, until at last, the house was sold in 2014.

To the New Owners is Madeleine Blais's charming, evocative memoir of this house, and of the Vineyard itself—from the history of the island and its famous visitors to the ferry, the pie shops, the quirky charms and customs, and the abundant natural beauty. But more than that, this is an elegy for a special place.

Laura Copland combines her classical training as an actor with her rigorous training as an attorney to approach each manuscript with intelligence, creativity, and honesty. She has appeared on Broadway and in regional theaters, as well as in myriad commercials. She is comfortable with numerous accents, including British, Austrian, Irish, French, and New York. Her timing and sense of humor enable her to give interesting reads in both fiction and nonfiction, including technical and academic copy. In addition to a JD, she holds an MA in historical studies. Her wide interests include raising butterflies, tending her garden, baking, hiking, and practicing French.