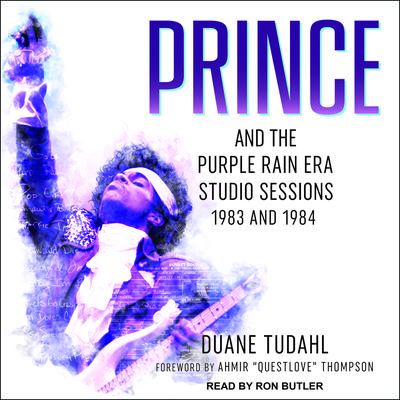 His journey is meticulously documented through detailed accounts of his time secluded behind the doors of the recording studio as well as his days on tour.

With unprecedented access to the musicians, singers, and studio engineers who knew Prince best, including members of the Revolution and the Time, Duane Tudahl weaves an intimate saga of an eccentric genius and the people and events who helped shape the groundbreaking music he created. From Sunset Sound Studios' daily recording logs and the Warner Bros. vault of information, Tudahl uncovers hidden truths about the origins of songs such as "Purple Rain," "When Doves Cry," and "Raspberry Beret" and also reveals details about Prince's unreleased outtakes.

This definitive chronicle of Prince's creative brilliance during 1983 and 1984 provides a new experience of the Purple Rain album as an integral part of Prince's life and the lives of those closest to him.

Ron Butler is a Los Angeles-based actor and voice artist with over a hundred film and television credits (playing everything from brooding doctors to screwball hipsters). Most kids will recognize him from the three seasons he spent on Nickelodeon's True Jackson, VP. Ron works regularly as a commercial and animation voice-over artist and has voiced a wide variety of audiobooks. He is a member of the Atlantic Theater Company and an Independent Filmmaker Project Award winner for his work in the HBO film Everyday People. Originally from the Bahamas, Ron grew up singing calypso onstage with his father (the country's number-one recording artist) before touring (and recording) in Europe with a jazz band. In his spare time, he impersonates the president while playing the ukulele.