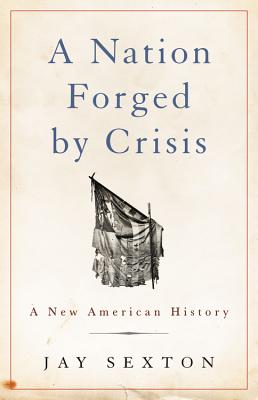 A Nation Forged by Crisis

A concise new history of the United States revealing that crises -- not unlike those of the present day -- have determined our nation's course from the start
In A Nation Forged by Crisis, historian Jay Sexton contends that our national narrative is not one of halting yet inevitable progress, but of repeated disruptions brought about by shifts in the international system. Sexton shows that the American Revolution was a consequence of the increasing integration of the British and American economies; that a necessary precondition for the Civil War was the absence, for the first time in decades, of foreign threats; and that we cannot understand the New Deal without examining the role of European immigrants and their offspring in transforming the Democratic Party.

A necessary corrective to conventional narratives of American history, A Nation Forged by Crisis argues that we can only prepare for our unpredictable future by first acknowledging the contingencies of our collective past.

Praise For A Nation Forged by Crisis: A New American History…

"Sexton organizes his astute history around 'the greatest periods of crisis in each century of its existence'.... Claiming that, in the current unsettled times, Americans should 'revisit [these] previous moments of crisis,' Sexton's book offers an insightful roadmap of how the country got here."—Publishers Weekly, starred review

"With U.S. constitutional democracy on alarmingly high alert, eminent scholar and prizewinning teacher Jay Sexton reminds us that the nation has been forged by crises. Though turbulent times have yielded extraordinary opportunities for change, outcomes have neither been certain nor up to Americans alone to decide. This is an essential read for anyone inclined to believe that the United States has determined its own destiny."—Kristin Hoganson, author of Consumers' Imperium: The Global Production of American Domesticity

"Bold in conception and rich in ideas, A Nation Forged by Crisis delivers a scintillating new reading of United States history. Jay Sexton places pivotal episodes in the American past within a broad framework of periodic disruptions brought about by international economic and strategic shifts. He triumphantly vindicates the interpretive possibilities of entangled global history, confirms his reputation as one of the most accomplished historians of his generation--and offers a lesson on the dangers that follow the nation's prioritising inward-looking objectives over international ones."—Richard Carwardine, author of Lincoln: A Life of Purpose and Power

"A Nation Forged by Crisis is a superb history of America-in-the-world. Building on the best new work on the crises that have shaped the unpredictable course of American history, Jay Sexton's provocative synthesis offers fresh perspectives on our own troubled times."—Peter Onuf, coauthor, with Annette Gordon-Reed, of Most Blessed of the Patriarchs

"Only a scholar of Jay Sexton's caliber could write a book that ranges so widely, offers so many keen insights, and is such a pleasure to read--even as it is a sober warning that Americans must remember our connections to the world outside our borders if we wish to navigate the crises that we confront."—Eric Rauchway,
author of The Money Makers and Winter War

Jay Sexton is the Kinder Institute Chair in Constitutional Democracy at the University of Missouri and emeritus fellow at Corpus Christi College, Oxford University. The author of The Monroe Doctrine and Debtor Diplomacy, Sexton lives in Columbia, Missouri.
or
Not Currently Available for Direct Purchase