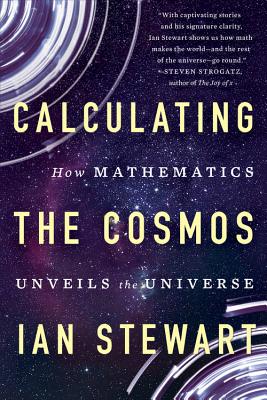 How Mathematics Unveils the Universe

In Calculating the Cosmos, Ian Stewart presents an exhilarating guide to the cosmos, from our solar system to the entire universe. He describes the architecture of space and time, dark matter and dark energy, how galaxies form, why stars implode, how everything began, and how it's all going to end. He considers parallel universes, the fine-tuning of the cosmos for life, what forms extraterrestrial life might take, and the likelihood of life on Earth being snuffed out by an asteroid.
Beginning with the Babylonian integration of mathematics into the study of astronomy and cosmology, Stewart traces the evolution of our understanding of the cosmos: How Kepler's laws of planetary motion led Newton to formulate his theory of gravity. How, two centuries later, tiny irregularities in the motion of Mars inspired Einstein to devise his general theory of relativity. How, eighty years ago, the discovery that the universe is expanding led to the development of the Big Bang theory of its origins. How single-point origin and expansion led cosmologists to theorize new components of the universe, such as inflation, dark matter, and dark energy. But does inflation explain the structure of today's universe? Does dark matter actually exist? Could a scientific revolution that will challenge the long-held scientific orthodoxy and once again transform our understanding of the universe be on the way? In an exciting and engaging style, Calculating the Cosmos is a mathematical quest through the intricate realms of astronomy and cosmology.

Praise For Calculating the Cosmos: How Mathematics Unveils the Universe…

"[Stewart] shows that he is not only a polymath in the sense that he is a master of all fields of mathematics, but also in his comprehension of physics, astronomy, and cosmology...[In Calculating the Cosmos] he effectively shows that time and technology will evolve ever better calculations of the cosmos."—Kirkus Reviews

"Ian Stewart covers the long story of our beloved
cosmos wearing mathematical glasses, and we can only be thankful that he has
been our guide in this journey."

"Stewart's wry sense of humor adds to this informative
yet entertaining read.... Highly recommended for science readers who are up for a
challenge."

"Like most of
Stewart's books, this one has much to recommend it."
—Mark Hunacek, MAA Reviews

"In his accessible and engaging style, Stewart uses
math to describe the architecture of space and time; dark matter and dark
energy; how galaxies, stars, and planets form; why stars implode; how
everything began; and how it's all going to end."

"In Calculating the Cosmos, Ian Stewart offers readers a marvelous, behind-the-scenes look, from a mathematician's perspective, at how science is able to perform its magic. With compelling, crystal-clear prose, laced with delightful analogies, Stewart brings the calculations behind astronomy and other scientific fields to life. With Stewart's excellent guide to the cosmos in hand, everything does compute--splendidly adding up to a fun, fascinating read."—Paul Halpern, author of Einstein's Dice and Schrödinger's Cat