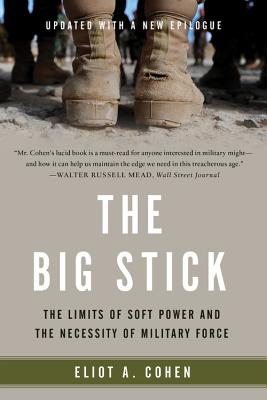 The Limits of Soft Power and the Necessity of Military Force

By Eliot A. Cohen

"Speak softly and carry a big stick" Theodore Roosevelt famously said in 1901, when the United States was emerging as a great power. It was the right sentiment, perhaps, in an age of imperial rivalry but today many Americans doubt the utility of their global military presence, thinking it outdated, unnecessary or even dangerous.

In The Big Stick, Eliot A. Cohen-a scholar and practitioner of international relations-disagrees. He argues that hard power remains essential for American foreign policy. While acknowledging that the US must be careful about why, when, and how it uses force, he insists that its international role is as critical as ever, and armed force is vital to that role.

Cohen explains that American leaders must learn to use hard power in new ways and for new circumstances. The rise of a well-armed China, Russia's conquest of Crimea and eastern Ukraine, nuclear threats from North Korea and Iran, and the spread of radical Islamist movements like ISIS are some of the key threats to global peace. If the United States relinquishes its position as a strong but prudent military power, and fails to accept its role as the guardian of a stable world order we run the risk of unleashing disorder, violence and tyranny on a scale not seen since the 1930s. The US is still, as Madeleine Albright once dubbed it, "the indispensable nation."

Eliot A. Cohen is the Robert E. Osgood Professor of Strategic Studies at Johns Hopkins University's School of Advanced International Studies (SAIS). He is the prize-winning author of several books, including Supreme Command and Conquered into Liberty, and former counselor of the Department of State.

Praise For The Big Stick: The Limits of Soft Power and the Necessity of Military Force…

"A balanced and sensitive analysis of America's military record since the attacks of Sept. 11, 2001...Mr. Cohen's lucid book is a must-read for anyone interested in military might--and how it can help us maintain the edge we need in this treacherous age."—Walter Russell Mead, Wall Street Journal

"Even if you disagree with Mr. Cohen... it's easy to spend time in his company. He writes thoughtfully, methodically, with unfussy erudition... an unfashionable, unabashed and - above all - unwavering case for the use of force in the service of American security and ideals."—Jennifer Senior, New York Times

"When one looks at the world as it is rather than how one may want it to be...Cohen's prescriptions make sense... I hope the valuable strategic analysis in this book will be taken up by the new administration."—John Hillen, War on the Rocks
or
Not Currently Available for Direct Purchase
Copyright © 2020 American Booksellers Association