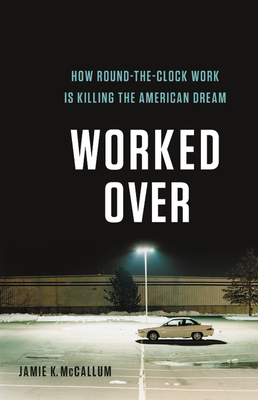 How Round-the-Clock Work Is Killing the American Dream

An award-winning sociologist reveals the unexpected link between overwork and inequality.
Most Americans work too long and too hard, while others lack consistency in their hours and schedules. Work hours declined for a century through hard-fought labor-movement victories, but they've increased significantly since the seventies. Worked Over traces the varied reasons why our lives became tethered to a new rhythm of work, and describes how we might gain a greater say over our labor time -- and build a more just society in the process.

Popular discussions typically focus on overworked professionals. But as Jamie K. McCallum demonstrates, from Amazon warehouses to Rust Belt factories to California's gig economy, it's the hours of low-wage workers that are the most volatile and precarious -- and the most subject to crises. What's needed is not individual solutions but collective struggle, and throughout Worked Over McCallum recounts the inspiring stories of those battling today's capitalism to win back control of their time.

Praise For Worked Over: How Round-the-Clock Work Is Killing the American Dream…

“Well-written…[McCallum] explores the reasons that Americans’ work hours have been growing since the 1970s, including the gig economy and the moribund labor movement.”—New York Times

"McCallum wants us to reignite the fight to raise wages, reduce work hours, and make work satisfying simultaneously. But, as he stresses, we must focus on the neglected aspect of time. The less time we spend at work, the more time we can spend looking for meaning where we will more likely find it -- among our families, friends, and communities."—Nation

"McCallum's latest work stands out among a spate of recent books about the dismal conditions of workers by offering a unifying focus on employees' loss of control over their jobs.... Rich with examples of middle- and working-class responses to job-related time pressures.... Subtly drawing on classic Marxian theory that capitalism steals laborers' lives as well as their work, [it] will find a welcome audience among those concerned about global working conditions."—Library Journal

"A thought-provoking look at the systemic problem of overworking in America."—Booklist

"McCallum may be the only social scientist who has worked as a longshoreman on the Seattle docks and marched in a picket line with the Exotic Dancers Union at the Lusty Lady peep show in San Francisco. Drawing on such colorful experiences as well as deep scholarly research, he makes the compelling argument that Americans are losing control of their work time.... A sobering analysis of quasi-Orwellian tactics that permeate American work life."—Kirkus

"An informative examination of the strains placed on American workers by 'overwork, unstable schedules, and a lack of adequate hours.' Interweaving anecdotes from the history of American labor with profiles of contemporary workers, union organizers, and social service administrators, McCallum lucidly explains how the current system came to be and offers hope that the resurgence of socialist principles can lead to improved working conditions.... A cogent, persuasive, and witty call for change."—Publishers Weekly

"Jamie McCallum's sharp and clarifying analysis links workers' freedom to control work time -- and thus their lives -- to our ability to have a functioning, genuine democracy. Worked Over underscores the need for workers to have significantly more power over the anti-worker decisions currently in the hands of the corporate elite."—Jane McAlevey, author of No Shortcuts: Organizing for Power in the New Gilded Age

"Worked Over examines an important, but little appreciated, aspect of America's out-of-control inequality: millions of Americans have scant say over when they work and how many hours they work. In this eminently readable, well-researched book, Jamie McCallum combines smart analysis, on-the-money anecdotes, and moving profiles of individual workers to explore the many ways that American workers are being squeezed by unfair, onerous work schedules."—Steven Greenhouse, author of Beaten Down, Worked Up: The Past, Present, and Future of American Labor

"As America grew more unequal, most people's workloads just kept growing and growing -- and there was little they could do about it. Worked Over helps us see what's going on and also how we might fight against it."—Bill McKibben, author of Deep Economy: The Wealth of Communities and the Durable Future

Jamie K. McCallum is professor of sociology at Middlebury College. His first book, Global Unions, Local Power, won the American Sociological Association's prize for the best book on labor. His work has appeared in scholarly journals and popular outlets such as the Washington Post, Mother Jones, Dissent, and Jacobin. He lives in Weybridge, Vermont.
Loading...
or
Not Currently Available for Direct Purchase