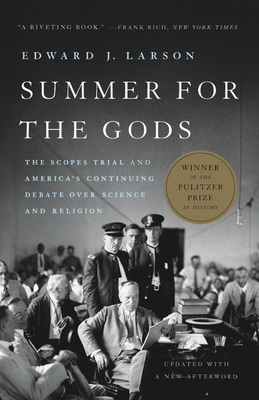 Summer for the Gods (Paperback)

The Scopes Trial and America's Continuing Debate Over Science and Religion

The Pulitzer Prize-winning history of the Scopes Trial and the battle over evolution and creation in America's schools.
In the summer of 1925, the sleepy hamlet of Dayton, Tennessee, became the setting for one of the twentieth century's most contentious courtroom dramas, pitting William Jennings Bryan and the anti-Darwinists against a teacher named John Scopes, represented by Clarence Darrow and the ACLU, in a famous debate over science, religion, and their place in public education. That trial marked the start of a battle that continues to this day in cities and states throughout the country.
Edward Larson's classic Summer for the Gods -- winner of the Pulitzer Prize in History -- is the single most authoritative account of this pivotal event. An afterword assesses the state of the battle between creationism and evolution, and points the way to how it might potentially be resolved.

Edward J. Larson is the author of twelve books, including The Return of George Washington and The Magnificent Catastrophe, and the recipient of the 1998 Pulitzer Prize in History. He is the University Professor of History and holds the Darling Chair in Law at Pepperdine University.

Praise For Summer for the Gods: The Scopes Trial and America's Continuing Debate Over Science and Religion…

"Edward Larson . . . tells the Scopes story with clarity and energy. . . .
His book may be among the best one-volume primers on an American
intellectual twilight."—Boston Globe

"Larson's work is a thoroughly researched, thoroughly readable retelling
of the tale. It leaves no subplot or character untouched. And when one
considers how powerful the tensions underlying events 72 years ago
remain today, Larson deserves hearty thanks. He's reintroducing us to
vital history that too quickly transformed into fiction and myth. . . .
The Scopes trial is still with us. Larson has elevated its presence from
simplified myth to illuminating fact."—Christian Science Monitor

"Larson's account is an unusually balanced and readable treatment of
the Scopes trial and its complexities. . . . Even better is Larson's ability
to humanize the trial and make it a tale of human folly. . . . The book
is a good read about an important and often misunderstood subject. For
his achievement, Larson deserves high praise."—D. G. Hart, American Historical Review

"Forget the Lindberg kidnapping trial, the Manson trial, or even the O.J.
trial. The real trial of the century was the Scopes Trial, and, although
much has been written about it, nothing comes close to the definitive
history written by Edward J. Larson."—Skeptic

"Edward Larson tells the true story of the Scopes trial brilliantly, and
the truth is a lot more interesting than the myth that was presented to
the public in Inherit the Wind."—Philip Johnson, University of California-Berkeley and author of Darwin on Trial

"Experts will learn much about the background and details of the
Scopes trial; the general reader will be drawn into the trial as never
before. Inherit the Wind, step aside!"—Will Provine, Cornell University

"A marvelous remake of the drama in Dayton. Summer for the Gods
accomplishes the extraordinary feat of teaching us a good deal that is new
about the trial and its significance, including the behind-the-scenes strategizing of the lawyers, the civil liberties stakes in the outcome, and the realities of its impact on the teaching of evolution in the United States."—Daniel J. Kevles, author of The Physicists: The History of a Scientific Community in Modern America

"Summer for the Gods is, quite simply, the best book ever written on the
Scopes trial and its place in American history and myth. The tone is
balanced; the research, meticulous; the prose, sparkling."—Ronald L. Numbers, University of Wisconsin-Madison and author, The Creationists

"Larson . . . gracefully documents the history of Darwinism, the theory of evolution and the fits and starts through which evolution became pitted against the Bible and fundamentalist religion. . . . Bryan's and Darrow's ghosts still haunt us, and the Scopes trial still holds resonance, as we continue to litigate the role of religion in public life and the power of the state to prescribe what shall be taught in public schools."—New York Times

"Larson brings understanding and perspective to a thorny issue."—Pittsburg Post-Gazette

"Skillfully interweaves the historical with the legal . . . A superbly balanced account, both in narrative as well as analysis. . . . Summer for the
Gods provides a thoughtful, reasoned approach to comprehending a
deep-rooted culture clash, which, although it might change with each
generation, shows little sign of disappearing."—Journal of Southern History

"Larson unlocks the past and renders it gracefully accessible in a narrative style that is easy to follow, despite the complexity of the intellectual
currents and counter-currents of his theme."—Los Angeles Times

"Larson's narrative manages to convey the complexity of the legal issues
as well as the drama of the event in a fluid and focused manner."—Journal of American History

"The real story of the Scopes trial, it turns out, is more interesting,
more mischievous, and more perverse than the complacent received
wisdom. A historian of science and a lawyer, Professor Larson has written a devastatingly good book."—Michigan Law Review

"Larson has done a wonderful job of writing an engaging yet scholarly
account of the issues surrounding this trial."—Choice

"Larson writes with clarity, insight, and poignancy for our times as well
as for this past history."—Library Journal

"Much more than a lively, informative piece of historical reconstruction and criticism: It is as relevant to present controversies as it would
have been in the 1920s. . . . a scholarly, extremely well-documented,
engrossing narrative that is accessible to a general audience."—Bioscience

"Magnificent reconstruction of the Scopes trial and its significance."—Church History

"An engagingly written book that not only sets the record straight
about the Scopes trial and the events surrounding it, but also shows
how one of the most famous cases in U.S. judicial history became an
enduring legend."—America

"Summer for the Gods is a remarkable retelling of the trial and the events
leading up to it, proof positive that truth is stranger than science."—Amazon.com

"Larson both challenges and enables history teachers to rethink their
teaching of the Scopes trial, McCarthyism, and the role of popular
culture in shaping perceptions of historical events."—History Teacher

""The most widely publicized misdemeanor case in American history." That is Edward J. Larson's description of the "monkey trial" in his
1997 Pulitzer Prize-winning Summer for the Gods: The Scopes Trial
and America's Continuing Debate Over Science and Religion. With that
debate again at a rolling boil, that book by Larson, professor of history and law at the University of Georgia, demonstrates that the trial
pitted a modernism with unpleasant dimensions against a religious
fundamentalism that believed, not without reason, that it was faithful
to progressive values."—Newsweek

"Edward Larson's training both in legal history and in the history of
science serves him well in Summer for the Gods. . . . Larson unlocks
the past and renders it gracefully accessible in a narrative style that is
easy to follow, despite the complexity of the intellectual currents and
counter-currents of his theme."—The Los Angeles Times Book Review

"Careful and evenhanded analysis dispels the mythologies and caricatures in film and stage versions of the trial, leaving us with a far clearer
picture of the cultural warfare that still periodically erupts in our
classes and courts."—Booklist

"The originality of his book arises in large part from its thoughtful,
evenhanded treatment of both sides in the confrontation-and the seriousness with which he takes the opposing convictions about religion,
science, and their relationship to the law that clashed in Dayton . . .
Larson's account of the trial and the legal issues involved in it [are] particularly illuminating . . . [He] provides a fascinating account of how the trial became the legend that was eventually passed on by Inherit the
Wind . . . [This is an] excellent book."—The New York Review of Books

"A Spencer Tracy film, Inherit the Wind, was based on the [John Scopes
Trial] and has shaped popular memories of it. But, as Edward J. Larson
shows in this Pulitzer Prize-winning book, the film's sinister mood is misleading . . . Larson artfully separates myths from realities to tell a more
complicated and convincing story. He also summarizes the continuing
efforts of Tennessee and other southern states to keep creationism on the
curriculum and evolution off it."—Patrick Allitt, Times Literary Supplement

"This book has already won a Pulitzer Prize, but it's worth calling
attention to again. . . . Larson . . . finds new things to say about the
famous "monkey trial" of 1925 and says them well. Among other
things, he shows how the trial helped to break down the longstanding
intellectual accommodation between Darwinism and Protestant theology, highlights the tensions between celebrity lawyer Clarence Darrow
and the rest of John Scopes's defense team, and demonstrates how the
enormously influential drama Inherit the Wind significantly warped
the trial and its aftermath."—Luther Spoehr, Providence Journal-Bulletin

Scholarly, informative . . . fair and meticulous . . . IN some ways, America seems to be only just learning the truth of the Scopes trial and the implications of the debate over evolution. [Larson's] book is a critical piece of the educational process."—First Things

A stunning and well-documented narrative that places the trial in an historical, legal, religious, and scientific context, and then continues beyond to assess its impact on the tension between science and religion that persists right up to the present."—Quarterly Review of Biology

Larson . . . is becoming one of the leading historians of his generation.—Gregg Easterbrook, Washington Monthly