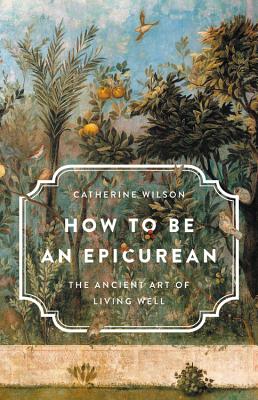 How to Be an Epicurean

The Ancient Art of Living Well

A leading philosopher shows that if the pursuit of happiness is the question, Epicureanism is the answer
Epicureanism has a reputation problem, bringing to mind gluttons with gout or an admonition to eat, drink, and be merry. In How to Be an Epicurean, philosopher Catherine Wilson shows that Epicureanism isn't an excuse for having a good time: it's a means to live a good life. Although modern conveniences and scientific progress have significantly improved our quality of life, many of the problems faced by ancient Greeks -- love, money, family, politics -- remain with us in new forms. To overcome these obstacles, the Epicureans adopted a philosophy that promoted reason, respect for the natural world, and reverence for our fellow humans. By applying this ancient wisdom to a range of modern problems, from self-care routines and romantic entanglements to issues of public policy and social justice, Wilson shows us how we can all fill our lives with purpose and pleasure.

Praise For How to Be an Epicurean: The Ancient Art of Living Well…

"An excellent debut... General readers interested in how the ancient Greeks viewed the good life will take great pleasure in Wilson's entertaining guide to Epicureanism for modern times."
—Publishers Weekly

"Wilson] guides readers through what can seem a very contemporary philosophy valuing rational thought, physical evidence, non-self-interested justice, and human free will.... This is a valuable introduction to a very influential philosophy."—Booklist

"A universe made only of
atoms and empty space? No life after death? Carefree gods
indifferent to mortals? Freedom from anxiety the highest good?
These were basic themes in ancient Epicureanism, and Catherine Wilson shows
eloquently how this ancient and most humane philosophy, when creatively
interpreted and applied, can help us to live well in the world today.
Even if this book does not make an Epicurean of you, it will teach you to
appreciate and admire Epicurus's wisdom and his relevance for our times."—David Konstan, professor of classics, New York University

"So
glad to see our Epicurean cousins back in the game! This is a new golden age of
practical philosophy!"—MassimoPigliucci, author of How to Be a Stoic

"Catherine
Wilson's book achieves something rare intellectually, the steep task its author
explicitly sets for herself: it carves out an accessible explication of an
idea, Epicureanism, to give readers more genuine, immediate agency over their
lives. But this isn't a book for Epicureans, or only for Epicureans. It's a
book for anyone who wants to use careful thought to make better considered,
happier choices."—MatthewWolfson, journalist

A spirited tour and
defense of Epicurean philosophy . . .—City Journal

Wilson's command of
her subject is unquestioned... All in all, she is an admirable guide along the
Epicurean path.—The Post and Courier

Catherine Wilson received her PhD in philosophy from Princeton University and has taught at universities in the US, Canada, and Europe. She has published more than 100 research papers and eight books, including A Very Short Introduction to Epicureanism and Metaethics from a First-Person Standpoint. She has two children and lives in New York City, where she is currently visiting presidential professor of philosophy at the Graduate Center at CUNY.
Loading...
or support indie stores by buying on