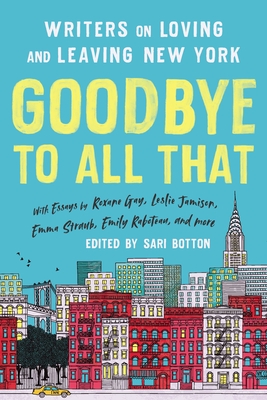 Goodbye to All That (Revised Edition)

From Roxane Gay to Leslie Jamison, thirty brilliant writers share their timeless stories about the everlasting magic—and occasional misery—of living in the Big Apple, in a new edition of the classic anthology.

In the revised edition of this classic collection, thirty writers share their own stories of loving and leaving New York, capturing the mesmerizing allure the city has always had for writers, poets, and wandering spirits. Their essays often begin as love stories do, with the passion of something newly discovered: the crush of subway crowds, the streets filled with manic energy, and the sudden, unblinking certainty that this is the only place on Earth where one can become exactly who she is meant to be.

They also share the grief that comes like a gut-punch, when the grand metropolis loses its magic and the pressures of New York's frenetic life wear thin for even the most dedicated dwellers. As friends move away, rents soar, and love—still—remains just out of reach, each writer's goodbye is singular and universal, just like New York itself.

Sari Botton is the essays editor for Longreads. She teaches writing courses at Catapult and in Bay Path University's MFA program. Her work has appeared in the New York Times, New York Magazine, the Village Voice, Harper's Bazaar, Marie Claire, More, and the Rumpus, plus other publications and anthologies. She lives in Kingston, New York.
Loading...
or support indie stores by buying on