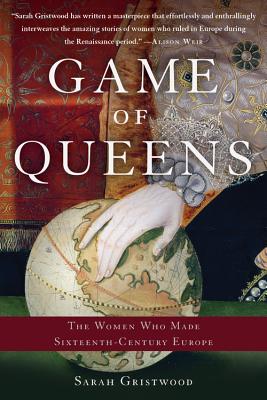 The Women Who Made Sixteenth-Century Europe

"Sarah Gristwood has written a masterpiece that effortlessly and enthrallingly interweaves the amazing stories of women who ruled in Europe during the Renaissance period." -- Alison Weir

Sixteenth-century Europe saw an explosion of female rule. From Isabella of Castile, and her granddaughter Mary Tudor, to Catherine de Medici, Anne Boleyn, and Elizabeth Tudor, these women wielded enormous power over their territories, shaping the course of European history for over a century. Across boundaries and generations, these royal women were mothers and daughters, mentors and protÃ©es, allies and enemies. For the first time, Europe saw a sisterhood of queens who would not be equaled until modern times. A fascinating group biography and a thrilling political epic, Game of Queens explores the lives of some of the most beloved (and reviled) queens in history.

Praise For Game of Queens: The Women Who Made Sixteenth-Century Europe…

"A
fascinating work of world and women's history."
—Booklist

"Gristwood's
fresh take on a well-documented period and the achievements, failures, and
relationships of some of Europe's most powerful players is intriguing,
cohesive, and accessible."

"[Game of Queens] casts a well-researched time period in an intriguing light.... Readers of popular history, especially of Tudor England, and of women's history will find much to enjoy."—Library Journal

"Sarah Gristwood handles
multiple narrative strands with tremendous finesse, dexterously synthesizing
the stories of women who, in many cases, never met but whose lives intertwined
in manifold ways."

"Game of Queens is a magnificent exploration of a most remarkable group--the women who ruled sixteenth century Europe. Sarah Gristwood gives us impeccable research, incisive attention to detail, and exquisite writing as she investigates these truly fascinating women and their lives of courage, tribulation, and determination. Absolutely unputdownable."—Kate Williams, authorof England's Mistress

"In
her elegant and engaging style, she combines incisive detail with over-arching
and eye-opening themes of queenship and the role of women in a male-dominated
world. This book is a wonderful, timely contribution to our understanding of
the period, and a pacy and illuminating good read."

Sarah Gristwood is a regular contributor to many London publications as well as a commentator on royal and historical affairs. The author of several previous books, including Blood Sisters, Gristwood splits her time between London and Kent, United Kingdom.
Loading...
or support indie stores by buying on