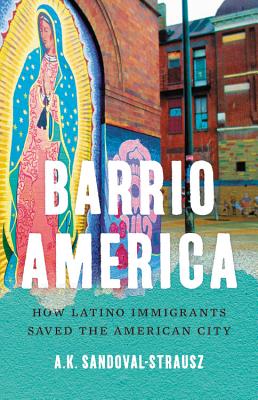 Thirty years ago, most people were ready to give up on American cities. We are commonly told that it was a "creative class" of young professionals who revived a moribund urban America in the 1990s and 2000s. But this stunning reversal owes much more to another, far less visible group: Latino and Latina newcomers.

Award-winning historian A. K. Sandoval-Strausz reveals this history by focusing on two barrios: Chicago's Little Village and Dallas's Oak Cliff. These neighborhoods lost residents and jobs for decades before Latin American immigration turned them around beginning in the 1970s. As Sandoval-Strausz shows, Latinos made cities dynamic, stable, and safe by purchasing homes, opening businesses, and reviving street life. Barrio America uses vivid oral histories and detailed statistics to show how the great Latino migrations transformed America for the better.

"Barrio America offers a welcome narrative for our demoralizing political moment.... Sandoval-Strausz does a masterful job here of weaving together interviews with current and former residents of the barrios, along with language from newspapers and government reports from the past 60 years, to piece together how racial logic operates."—Slate

"This book is a gripping, necessary, and eye-opening addition to the voices calling for equality in America....Barrio America is documentation of the resilience, power, and positive influence of Hispanic immigrants and migrants with a focus on the neighborhoods' individuals. It's a fact-based and more modest version of a from-rags-to-riches story that celebrates community and the underappreciated people who persevere and improve life in a place that may not always be particularly welcoming."—Porchlight

"Today, as the country grapples with a resurgence of anti-immigrant hatred, this fascinating history couldn't be more timely...Barrio America weaves together several strands of urban studies to tell a story that transcends what might seem like irrevocable barriers of race and class."—Texas Observer

"As Barrio America points out, Latin American neighborhoods helped establish these common bonds of identity and memory, but in the era of New Urbanism and the creative class, the appeal of these kinds of communities usher in economic forces that can disrupt or destroy that very community building. This has been a source of tension as Bishop Arts continues to clone, driving up property values and forcing many original residents out. This new book reminds us that those economic forces do more than displace; they disrupt the fundamental social fabric of the neighborhood and destroys the very thing that made it a neighborhood in the first place."—D Magazine

"[A] thoughtful, provocative, and well-written study of why
Hispanics have been and continue to be vital to the health of American cities.
Likely to become a staple in Latinx and urban studies."—Library Journal

"This essential, timely book recounts the history of urban America, often told in white and Black, through the wide lens of Latino immigration... Deeply researched, full of insights, and with a powerful message, powerfully told, the story of American cities remains a story of migration."—Booklist

"[A] judicious account of the role that Latino immigrants have played in revitalizing American cities over the second half of the 20th century.... By documenting the opportunities provided to Latino immigrants as a secondary effect of white discrimination against blacks, Sandoval-Strausz presents a helpful guide to understanding the mechanisms of systemic racism, and he reminds readers that the current immigration debate is grounded in decades of local and national policy."—Publishers Weekly

"Barrio America shows that immigration is rejuvenation. In this compelling, persuasive history, Sandoval-Strausz shows how Latino and Latina immigrants acted as a grassroots-level force of urban revitalization. With a message urgent for our times, it reminds us that immigrants have for centuries infused our cities with life and promise, and that Hispanics are a vital part of this long American tradition."—Becky Nicolaides, research affiliate, UCLA Center for the Study of Women and Huntington-USC Institute on California and the West

"By illuminating national trends in urban policy and bringing Latin American migrants to life through their personal oral histories, A.K. Sandoval-Strausz underscores why you can't understand American cities without studying Latinos. In Barrio America, he expertly explains how Latinos renewed our urban spaces through homeownership, contributed to cities' cultural vibrancy, and how, through their actions and presence, they opened the doors for our current urban reality."—Rosina Lozano, author of An American Language: The History of Spanish in the United States

"A.K. Sandoval-Strausz's Barrio America tells the untold story of a powerful force in revitalizing America's cities: Latin American immigrants. Instead of erecting walls to limit immigration, America should open its arms to those whose talent, hard work and ambition contribute so very much to our economy and our great cities."—Richard Florida, author of The Rise of the Creative Class and The New Urban Crisis

"Barrio America is the strongest, most sophisticated rebuttal to the idea that immigration from Latin America has destroyed our country. In prose as eloquent as it is prescient, A.K. Sandoval-Strausz upends the notion that America's cities were in decay from the 1960s to the current moment of revitalization. He shows how Latinx initiated this recovery and have sustained it in the face of xenophobia, public divestment, and neglect. Finally, someone has honored the sacrifices of the most-maligned immigrant community of our time."—Matt García, author of From the Jaws of Victory: The Triumph and Tragedy of Cesar Chavez and the Farm Worker Movement

"A fascinating book on how Latino immigrants have revitalized dying American cities in recent decades, Barrio America is as illuminative as it is necessary, upending longstanding misconceptions about urban renewal and migration. A.K. Sandoval-Strausz enriches his historical analyses with the compelling voices of new immigrants. Highly recommended."—Cristina García, author of Dreaming in Cuban

"Barrio America is a path-breaking book. A.K. Sandoval-Strausz meticulously chronicles the dynamic social and economic contributions Latin American immigrants have made in transforming cities into vibrant spaces while generating new cultural forms and businesses of every sort. Challenging previous histories of the urban crisis, Barrio America excites the imagination and forces all of us to rethink the rampant xenophobia of our day." —Ramón A. Gutiérrez, Preston & Sterling Morton distinguished service professor of American history, University of Chicago

A. K. Sandoval-Strausz is director of the Latina/o studies program and associate professor of history at Penn State University. He is the author of Hotel: An American History and coeditor of Making Cities Global. He lives in State College, Pennsylvania.
Loading...
or support indie stores by buying on