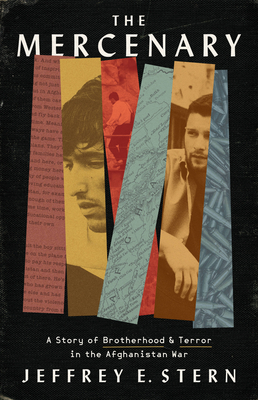 A Story of Brotherhood and Terror in the Afghanistan War

A thrilling and emotional story about the bonds forged in war and good intentions gone wrong.

In the early days of the Afghanistan war, Jeff Stern was scouring the streets of Kabul for a big story. He was accompanied by a driver, Aimal, who had ambitions of his own: to get rich off the sudden infusion of foreign attention and cash.

In this gripping adventure story, Stern writes of how he and Aimal navigated an environment full of guns and danger and opportunity, and how they forged a deep bond.

Then Stern got a call that changed everything. He discovered that Aimal had become an arms dealer, and was ultimately forced to flee the country to protect his family from his increasingly dangerous business partners.

Tragic, powerful, and layered, The Mercenary is more than a wartime drama. It is a Rashomon-like story about how politics and violence warp our humanity, and keep the most important truths hidden.

Praise For The Mercenary: A Story of Brotherhood and Terror in the Afghanistan War…

The Mercenary is one of the most important books about America’s longest war. It is a story of two individuals from two different continents brought together by war, and their courage, absolute commitment, and sacrifices for each other will make you laugh, cry, rage, break your heart, then make you laugh again and again until you are healed. It reads like an immersive thriller, but it is more compelling because the events are true and riveting. Mr. Stern has managed to show how the levers of power in Afghanistan devastate ordinary Afghans who try to make a living. The Mercenary is a must-read.—Qais Akbar Omar, author of A Fort of Nine Towers

It’s remarkable how little we understand about what really went on in America’s twenty-year war in Afghanistan. The Mercenary is not just a story about that war—it’s a story about the misunderstanding that defined it. At once heart-pounding and complex, personal and expansive, this book is full of guns and dust and fast cars, but also something key to great war reporting: heart.—Peter Bergen, CNN National Security Analyst

A moving story full of humanity and great curiosity. A riveting and heart-pounding war story. The Mercenary is a special book.—Chai Vasarhelyi and Jimmy Chin, Oscar-winning directors of Free Solo

This is an extraordinary account of friendship between a journalist and his driver in wartime Afghanistan. Mr. Stern's brilliantly written and unvarnished portrayal of his debut as a bumbling wannabe war correspondent and close friendship with his driver, a man with a shrewd eye for opportunity, provides an important window into the spiral of corruption and violence perpetrated by the West’s war. A must read for those seeking a first hand view into the business of war in Afghanistan and those caught up in the madness.
—Jessica Donati, author of Eagle Down

“An affecting story of the human costs of a war.”—Kirkus Reviews

Jeffrey E. Stern is an award winning journalist and author. Stern has written three books, including The 15:17 to Paris, which was turned into a major motion picture by Clint Eastwood and Warner Brothers, and The Last Thousand, which received honorable mention for best book of the Year by Library Journal. He has reported from Yemen, Iraq, Afghanistan, Guantanamo Bay, Kashmir, the epicenter of the west African Ebola outbreak, and Oklahoma’s death row. His work has appeared in The New York Times Magazine, Vanity Fair, The Atlantic, and other outlets. In 2019, he received the Overseas Press Club award for the best human rights reporting in any medium, and the Amnesty International award for foreign reporting.
Loading...
or support indie stores by buying on