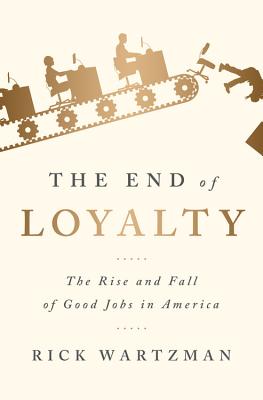 The End of Loyalty

The Rise and Fall of Good Jobs in America

Having a good, stable job used to be the bedrock of the American Dream. Not anymore.

In this richly detailed and eye-opening book, Rick Wartzman chronicles the erosion of the relationship between American companies and their workers. Through the stories of four major employers -- General Motors, General Electric, Kodak, and Coca-Cola -- he shows how big businesses once took responsibility for providing their workers and retirees with an array of social benefits. At the height of the post-World War II economy, these companies also believed that worker pay needed to be kept high in order to preserve morale and keep the economy humming. Productivity boomed.

But the corporate social contract didn't last. By tracing the ups and downs of these four corporate icons over seventy years, Wartzman illustrates just how much has been lost: job security and steadily rising pay, guaranteed pensions, robust health benefits, and much more. Charting the Golden Age of the '50s and '60s; the turbulent years of the '70s and '80s; and the growth of downsizing, outsourcing, and instability in the modern era, Wartzman's narrative is a biography of the American Dream gone sideways.

Deeply researched and compelling, The End of Loyalty will make you rethink how Americans can begin to resurrect the middle class.

Finalist for the Los Angeles Times book prize in current interest
A best business book of the year in economics, Strategy+Business

Praise For The End of Loyalty: The Rise and Fall of Good Jobs in America…

"Rick Wartzman is one of America's finest journalists and this book reminds us why. The End of Loyalty is the story of an idea-that companies and workers are bound not just by formal agreements, but by a deeper social contract. With a historian's sweep and a novelist's eye for detail, Wartzman shows how that contract unraveled and what its demise means for all of us. This is a book people will be reading for many years to understand the American experience."—Daniel H. Pink, author of Drive, A Whole New Mind, and To Sell Is Human

"The End of Loyalty is the rich story of how the corporate bonds that were once essential to American life have fractured. It's a prescient book that helps explain the rise of Donald Trump and why so many people feel anger and an acute sense of loss."—Jill Abramson, former executive editor of the New York Times

"The End of Loyalty tells a story that needs to be told. Rick Wartzman vividly describes a world in which corporate leaders believed that good business meant generating value for their employees as well as their shareholders, an old-fashioned attitude whose time may come again. It's a great book."—Anne-Marie Slaughter, president and CEO of New America and author of Unfinished Business

"In a lucid economic history of the last seventy-five years, Rick Wartzman's The End of Loyalty convincingly argues that the economic angst and political turbulence of our moment are linked to the collapse of a corporate social contract that guided American economic life for much of the twentieth century. While Wartzman places much of the blame for this problem on business and a growing obsession with profit, he challenges all of us-liberals and conservatives, CEOs and union members-to imagine what a new social contract might look like."—E. J. Dionne Jr., author of Our Divided Political Heart and Why the Right Went Wrong

"A timely and urgent book. Meticulously written and impressively researched, Rick Wartzman's The End of Loyalty is a penetrating account of the end of the golden years of American capitalism and the unraveling of the social contract. This book will be required reading for anyone hoping to understand our current age of anxiety."—Greg Grandin, author of Kissinger's Shadow and Fordlandia

"Wartzman, a senior advisor at the Drucker Institute, documents the deterioration of company-employee loyalty at some of America's corporate giants in this insightful economic history...This impeccably written treatise asserts that it's imperative for Americans to 'share our prosperity more broadly once again' and reinstitute a stronger social contract between corporate executives and the workers who make a company successful."
—Publishers Weekly

"Wartzman, senior advisor at the Drucker Institute, explores what could be the defining questions of the twenty-first century-where we were, where we are, and where we are headed in terms of jobs and the nature of corporate America in all its bitter reality. His research is excellent and even-handed... Essential reading for those who have ever worried about their jobs."
—Booklist

"A sharp-edged examination of why large American employers shifted from loyalty to their workers to loyalty focused primarily on stockholders. Through deep reporting and anecdotal storytelling, former Wall Street Journal and Los Angeles Times writer and editor Wartzman delineates the often shameful evolution of policies by concentrating on four of the biggest corporations in the world: Coca-Cola, Kodak, General Motors, and General Electric... A lively history with relevance to every worker."—Kirkus

"The changing relationship between large American corporations and their workers in the 20th century provides the basis for this thoughtful and enlightening volume by Wartzman... Highly recommended for general readers and those interested in labor-management issues."—Library Journal

"A brilliant, rogue history of American business's transformation over the past 75 years."
—Forbes

Rick Wartzman is director of the KH Moon Center for a Functioning Society at the Drucker Institute, a part of Claremont Graduate University. He also writes about the world of work for Fortune magazine online. Before joining the Drucker Institute in 2007 as its founding executive director, Rick worked for two decades as a reporter, editor and columnist at the Wall Street Journal and Los Angeles Times. While business editor of the Times, he helped shape a three-part series on Wal-Mart's impact on the economy and society, which won the 2004 Pulitzer Prize for National Reporting.
Loading...
or support indie stores by buying on