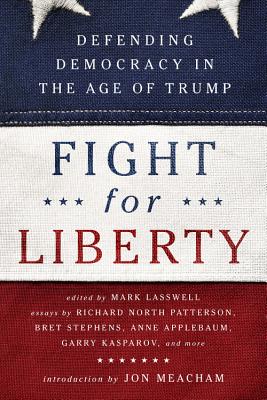 Defending Democracy in the Age of Trump

Anne Applebaum, Garry Kasparov, Richard North Patterson, and a constellation of other thinkers make the urgent case for liberal democracy -- reinvigorating its central values in an age of doubt and discord.

Liberal democracy is in crisis around the world, besieged by authoritarianism, nationalism, and other illiberal forces. Far-right parties are gaining traction in Europe, Vladimir Putin tightens his grip on Russia and undermines democracy abroad, and America struggles with poisonous threats from the right and left.

But the defenders of democracy are strong too. Taking their cues from the 1788 Federalist Papers, the Renew Democracy Initiative is a collective of pro-democracy advocates from across the political spectrum, including Anne Applebaum, Garry Kasparov, Max Boot, Bret Stephens, Ted Koppel, and Natan Sharansky. This book is their foundational document, a collection of essays that analyze the multi-pronged threats to liberal democracy in the U.S. and abroad, and offer solutions based on fundamental democratic principles such as freedom of speech, a free press, and the rule of law.

Fight for Liberty is a roadmap for the struggle against the rising tide of extremism and a cri de coeur in defense of the liberal world order, which sees itself threatened as never before today.

Praise For Fight for Liberty: Defending Democracy in the Age of Trump…

"The voices are familiar but fresh. And the topics they explore are handled with a deftness and texture richer than one might expect from a cohesive battle cry....There is a subtle (or not so subtle) prophecy that underlies these essays - the prophecy that such a turn of events is not only possible but probable if liberty is not defended now. Is this truly the fate of things to come? If we don't stand up and 'fight for liberty,' the text suggests, our greatest fears may be realized. The good news is these authors, and many of their devotees, will not go quietly into that good night."
—Martha's Vineyard Times

"Fight for Liberty should be required reading for every college student-indeed, for every American and, regardless of their nationality, every person capable of reading and understanding the 1776 Declaration of Independence and the 1948 Universal Declaration of Human Rights. To comprehend the threats confronting our world and consider what to do about them, reading and re-reading this book's essays will be worthwhile."—Walter Clemens, New York Journal of Books

"The strongest point of this useful collection is the depth and breadth of its opposition to our current illiberal atmosphere...A valuable addition to the literature of democratic resistance."
—Kirkus Reviews

The Renew Democracy Initiative is a not-for-profit organization dedicated to the defense of democratic freedom and prosperity. Championing the values on which the free world was built, RDI seeks to unite the center-left and center-right by making the case for liberty, democracy and sanity in an age of discord. RDI aims to generate fresh thinking by convening the best minds from different countries in the service of liberty and democracy in the West and around the world.

Mark Lasswell, a Renew Democracy Initiative board member, is an op-ed editor at the Washington Post and the former editorial features editor, overseeing op-eds, at the Wall Street Journal.
Loading...
or
Not Currently Available for Direct Purchase