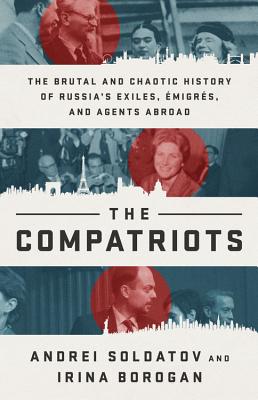 The Brutal and Chaotic History of Russia's Exiles, Émigrés, and Agents Abroad

The authors of The Red Web examine the shifting role of Russian expatriates throughout history, and their complicated, unbreakable relationship with the mother country--be it antagonistic or far too chummy.

The history of Russian espionage is soaked in blood, from a spontaneous pistol shot that killed a secret policeman in Romania in 1924 to the attempt to poison an exiled KGB colonel in Salisbury, England, in 2017. Russian émigrés have found themselves continually at the center of the mayhem.
Russians began leaving the country in big numbers in the late nineteenth century, fleeing pogroms, tsarist secret police persecution, and the Revolution, then Stalin and the KGB--and creating the third-largest diaspora in the world. The exodus created a rare opportunity for the Kremlin. Moscow's masters and spymasters fostered networks of spies, many of whom were emigrants driven from Russia. By the 1930s and 1940s, dozens of spies were in New York City gathering information for Moscow.
But the story did not end with the collapse of the Soviet Union. Some émigrés have turned into assets of the resurgent Russian nationalist state, while others have taken up the dissident challenge once more--at their personal peril. From Trotsky to Litvinenko, The Compatriots is the gripping history of Russian score-settling around the world.

Praise For The Compatriots: The Brutal and Chaotic History of Russia's Exiles, Émigrés, and Agents Abroad…

"Borogan and Soldatov have uncovered a series of thrilling narratives about the strange, desperate, and passionate world of Russians abroad. Each one is worth a film in itself but when combined with the insights into the intelligence operative who monitored, wooed, duped, bribed, or killed them, the authors have come up with a novel, refreshing, and illuminating look into the enigma of the Russian soul."—Misha Glenny, author of McMafia: A Journey Through the Global Criminal Underworld

"Through a series of endlessly compelling stories, Soldatov and Borogan make the case that Putin is carefully grooming and manipulating the vast Russian émigré community to serve the interests of their mother country. You can't follow Russian politics without Soldatov and Borogan's reporting. In The Compatriots, they once again deliver the fascinating inside story that's absent from the American press."—Joseph Weisberg, creator and executive producer of The Americans

"Talk about courageous journalism! Here's an inside expose of Russian poisonings, assassinations, and political meddling written by two Russian investigative journalists, Andrei Soldatov and Irina Borogan. They narrate a century of the Kremlin's dirty tricks through manipulation of Russians living abroad-making them serve the dark purposes of the state. Reading this book, you understand that there are still many brave, patriotic Russians who want what's best for their country, not just Vladimir Putin. If you liked watching The Americans on TV, then The Compatriots is a must-read. This isn't spy fiction, but spy fact."—David Ignatius, columnist for the Washington Post and author of The Quantum Spy

"A fascinating account of Russia's relations with its diaspora since 1917, weaving together stories of émigrés and spies, from Trotsky and his assassins to anti-Putin activists and billionaire oligarchs today."
—L.A. Review of Books

"The Compatriots helps us understand and put into perspective the history of the Kremlin's efforts to cope with, and control its perceived enemies.....an important contribution to the historical record of the Soviet Union and Russia."
—Cipher Brief

"An absorbing account....Colorful characters and piquant details make this a lively story. Readers curious about Russian political affairs and espionage will eat it up."—Publishers Weekly

"Soldatov and Borogan are two of the most revered experts on the subject of Russian secret services.... [The Compatriots] reads like a bunch of Hollywood plots bundled together into one mind-bending narrative.... a great read that now forms a perfect trilogy with two previous books--The New Nobility, which describes how secret services captured the Russian state under Putin, and The Red Web, which looks into the Kremlin's attempts to control the Internet."
—NPR.org

"A fine and timely new book...In The Compatriots, authors Andrei Soldatov and Irina Borogan show that what has become the institutional practice of Moscow's security organs was honed in the early decades of Soviet government, when it perfected its methods against members of the Russian diaspora."—New York Review of Books

"[An] engaging history...The Compatriots offers a Russian perspective on fears, usually heard in the west, about the 'active measures' of propaganda and disinformation, as well as the arts of infiltration and assassination."—Financial Times

"Veteran Russian journalists Andrei Soldatov and Irina Borogan have tried to make sense of one strand in their country's complex history, the role of Russians who were either sensible or cunning enough to leave at crucial moments, mainly for a West from which Russian mentalities have often been estranged."—Washington Times

“These brave and intrepid journalists have produced a convincing argument.”—Russian Review

Andrei Soldatov and Irina Borogan are cofounders of Agentura.Ru and authors of The Red Web and The New Nobility. Their work has been featured in the New York Times, Moscow Times, Washington Post, Online Journalism Review, Le Monde, Christian Science Monitor, CNN, and BBC. The New York Times has called Agentura.ru "a web site that came in from the cold to unveil Russian secrets." Soldatov and Borogan live in Moscow, Russia.
Loading...
or support indie stores by buying on