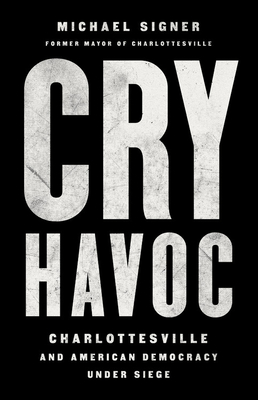 Charlottesville and American Democracy Under Siege

The former mayor of Charlottesville delivers a vivid, first-person chronicle of the terror and mayhem of the August 2017 "Unite the Right" event, and shows how issues of extremism are affecting not just one city but the nation itself.
The deadly invasion of Charlottesville, Virginia, by white nationalist militias in August 2017 is a microcosm of the challenges facing American democracy today. In his first-person account of one of recent American history's most polarizing events, Michael Signer, then Charlottesville's mayor, both tells the story of what really happened and draws out its larger significance.
Signer's gripping, strikingly candid "you are there" narrative sets the events on the ground-the lead-up to August's "Unite the Right" rally, the days of the weekend itself, the aftermath-in the larger context of a country struggling to find its way in a disruptive new era. He confronts some of the most challenging questions of our moment, namely how can we:
While Signer shows how easily our communities can be taken hostage by forces intent on destroying democratic norms and institutions, he concludes with a stirring call for optimism, revealing how the tragic events of Charlottesville are also bolstering American democracy from within.

Praise For Cry Havoc: Charlottesville and American Democracy Under Siege…

"[D]eeply introspective... [Signer] offers a thorough analysis of the 'shortcomings' of First Amendment law and the failures of policing. He emerges as a well-intentioned, proactive figurehead... A complex, disturbing, valuable tale of racial disharmony, government failure, and one man's frantic attempts to save the day."—Kirkus Reviews

"[O]ffers a first-person chronicle of events that dramatically pits the First Amendment (free speech) against public order. How are they reconciled? That to a great extent is Signer's story. His narrative adds a much needed depth and perception... stress[ing] where American democracy stands in light of Charlottesville and continuing racial events of today."—The Daily Press

“A vital volume to understand the background of the traumatic events that changed the course of Charlottesville and the nation’s history.”—The Virginia Gazette

"A reflective insider account ... Michael Signer, then mayor of Charlottesville, worked mightily, as his book Cry Havoc makes clear, to try to avert the white supremacist standoff that took the life of Heather Heyer and tarnished the name of his town. ... Signer grapples with the limits of the First Amendment and ... raises thoughtful questions with no easy answers. Should provocateurs be given demonstration permits when their objective is to provoke? Signer offers a long rumination on his efforts to stay true to a freedom he holds dear while not giving energy to people who repulse him. ...The mayhem on the streets of Charlottesville bruised the idealism of Signer, who had grand ambitions of remaking the normally tranquil college town into a capital of the resistance against the politics of President Trump."—New York Times

"Mike Signer had a unique vantage point on one of the inflection points of our time: the white-supremacist rallies and violence in Charlottesville in 2017. In this important new book, he explores where we've been, where we are, and--most important--where we should be headed if we can summon our better angels."— Jon Meacham, author of The Soul of America

"Michael Signer's Cry Havoc goes behind the scenes as neo-Nazis descended on Charlottesville, Virginia in August 2017, transforming a small college town into an international flashpoint of extremist hatred and racial confrontation. The former mayor recounts, from his firsthand vantage point, the events of that tragic and dramatic weekend. This well-written, disturbing volume serves as a warning about what may be coming in America's increasingly divided society. We would be wise to heed the lessons of Charlottesville before one small city's dreadful conflict becomes the blueprint for violence from coast to coast."—Larry Sabato, director, UVA Center for Politics

"A report from the frontlines of Trump's America. Polarization, race, politicized memory, violence, and good-willed efforts of citizens and politicians to navigate it all. Mike Signer gives us his on-the-ground view of 'Charlottesville under siege' revealing the deep vulnerabilities and promise of American democracy."
— Daniel Ziblatt, Harvard University, coauthor of How Democracies Die

"Cry Havoc vividly recounts the disturbing events in Charlottesville and reminds us that the battle to preserve our democratic institutions is an enduring part of our national experience. Essential reading in a time of national peril."—Robert Dallek, author, of An Unfinished Life: JFK, 1917-1963

"Former Charlottesville Mayor Mike Signer, in providing an account of the tribulations in the lead-up to and aftermath of the Unite the Right rally, demonstrates the pain and struggle of a community defending itself from hate and constructing a collective path together toward a vision of belonging. He also offers an intimate glimpse into what it takes to carry the immense weight of responsibility and accountability to the public amid such turbulence. In doing so, Signer gives his readers firsthand insight into the necessary conflict that is at the heart of true bridging. But that through compassion, faith, and commitment to one another, extremism can be overcome toward a broad expansion of the circle of human concern."—John A. Powell, director of the Haas Institute for a Fair & Inclusive Society, University of California, Berkeley

"Charlottesville, Virginia, my hometown, is now an emblem and a microcosm of the tensions and divisions roiling our nation. Mayor Michael Signer found himself in the center of a growing brushfire that culminated in the murderous Unite the Right demonstration in August 2017. Here he tells a difficult, unsparing, but often engrossing story that illuminates just how hard it can be to face our past while also finding a healing and hopeful path forward."—Anne-Marie Slaughter, CEO, New America

"Since the Unite the Right rally, I have tried to understand the events around the murder of my daughter. Cry Havoc is an important narrative of Charlottesville, providing unique insights to help make sense of the senseless, and moving us to a place of hope and courage."—Susan Bro, cofounder and president, Heather Heyer Foundation

"Cry Havoc chronicles how Charlottesville, VA, was torn apart by violence and murder in the summer of 2017 and how the small town has come together to heal since then. By telling the deep story of the rally that shocked the world, Mike Signer, the mayor of Charlottesville and an influential political theorist, not only takes us deep inside the life of one small American town; he points to lessons that could inspire the whole country to move towards a better future."—Yascha Mounk, author of The People vs. Democracy

"Mike Signer held the front and center seat during Charlottesville's darkest moments when our nation's democracy, values, and rule of law faced the worst of challenges. His brilliant, inspiring, accurate, and timely account is a must-read for every American concerned about the future of democracy, the civility of our discourse, and the harm of extremism."—Khizr Khan

"Mike Signer does something remarkable in Cry Havoc. He takes responsibility. With candor and integrity, he describes his actions, his omissions, his ambitions, and his limits as a mayor in the midst of a consuming public crisis. This book will make every reader ask, 'What would I do? What choices would I make?' And it will make every reader a more wise and skillful citizen."—Eric Liu, CEO, Citizen University and author of You're More Powerful Than You Think: A Citizen's Guide to Making Change Happen

The Hon. Michael Signer, mayor of Charlottesville from 2016-2018, is the author of Demagogue: The Fight to Save Democracy from Its Worst Enemies and Becoming Madison: The Extraordinary Origins of the Least Likely Founding Father.
A public scholar, practicing attorney, and executive, Dr. Signer has written for the New York Times, Washington Post, and Time, and has been interviewed by Meet the Press, Face the Nation, and NPR. He has been profiled by the New York Times, Washington Post, and CNN, and has received awards from such organizations as the Anti-Defamation League and the Matthew Shepard Foundation.