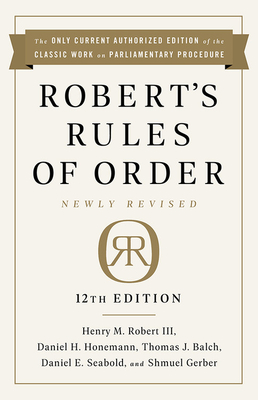 Robert's Rules of Order is the recognized guide to smooth, orderly, and fairly conducted meetings. This 12th edition is the only current manual to have been maintained and updated since 1876 under the continuing program established by General Henry M. Robert himself. As indispensable now as the original edition was more than a century ago, Robert's Rules of Order Newly Revised is the acknowledged "gold standard" for meeting rules.

New and enhanced features of this edition include:

Coinciding with publication of the 12th edition, the authors of this manual have once again published an updated (3rd) edition of Robert's Rules of Order Newly Revised In Brief, a simple and concise introductory guide cross-referenced to it.

Henry M. Robert III (1920-2019), grandson of General Robert, began his association with Robert's Rules of Order Newly Revised in writing the 1970 edition and participated in writing six editions, culminating in this 12th edition. He served as parliamentarian of the National Association of Parliamentarians and multiple other national and international organizations. Daniel H. Honneman, a Maryland attorney, now retired, is a past President of the Maryland Association of Parliamentarians. Thomas J. Balch is a practicing parliamentarian who formerly acted as a Washington, DC-based lobbyist and legislative analyst. He has served as parliamentarian of the NAP. Daniel E. Seabold is a mathematics professor at Hofstra University specializing in logic and set theory. Shmuel Gerber, a professional parliamentarian and copyeditor, has served as the Assistant Editor of the National Parliamentarian.
Loading...
or support indie stores by buying on