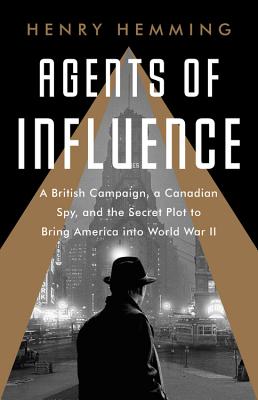 A British Campaign, a Canadian Spy, and the Secret Plot to Bring America into World War II

The astonishing story of the British spies who set out to draw America into World War II
As World War II raged into its second year, Britain sought a powerful ally to join its cause-but the American public was sharply divided on the subject. Canadian-born MI6 officer William Stephenson, with his knowledge and influence in North America, was chosen to change their minds by any means necessary.
In this extraordinary tale of foreign influence on American shores, Henry Hemming shows how Stephenson came to New York--hiring Canadian staffers to keep his operations secret--and flooded the American market with propaganda supporting Franklin Roosevelt and decrying Nazism. His chief opponent was Charles Lindbergh, an insurgent populist who campaigned under the slogan "America First" and had no interest in the war. This set up a shadow duel between Lindbergh and Stephenson, each trying to turn public opinion his way, with the lives of millions potentially on the line.

Henry Hemming is the author of five works of non-fiction including most recently Agent M, and The Ingenious Mr Pyke, which landed on the New York Times monthly espionage bestseller list. He has written for The Sunday Times, Daily Telegraph, Daily Mail, The Times, The Economist, FT Magazine and The Washington Post, and has given interviews on Radio 4's Today Programme and NBC's Today Show and spoken at schools, festivals and companies including RDF Media, The RSA, Science Museum, Frontline Club and The School of Life. Henry lives in London with his wife, daughter and son.

Praise For Agents of Influence: A British Campaign, a Canadian Spy, and the Secret Plot to Bring America into World War II…

"Hemming is very much in control of his material. Bite-size chapters paint fascinating miniatures, often with a cliff-hanger to keep the pages turning... What more fertile ground could there be for a book than such an important premise, with modern resonance, explored through a tale of difficult odds, brilliant ruses, espionage and good old-fashioned detective work. In Hemming's sure hands, America's uncertain progress towards direct engagement in the second world war becomes riveting history."—The Spectator (UK)

"Agents of Influence is fun, delightful reading. Hemming provides a lucid narrative that draws on recently declassified documents and reads like an historical fiction. Hemming has a few books already under his belt, including Agent M: The Lives and Spies of MI5's Maxwell Knight, which documents his knack for bringing to life seemingly forgotten British spy history."—Cipher Brief

"Gripping and intoxicating, it unfolds like the best screenplay."—Nicholas Shakespeare, author of The Dancer Upstairs

"A revelatory and wholly fascinating work of history. Superbly researched and written with gripping fluency, this lost secret of World War II espionage finally has its expert chronicler."—William Boyd
or support indie stores by buying on
Copyright © 2020 American Booksellers Association