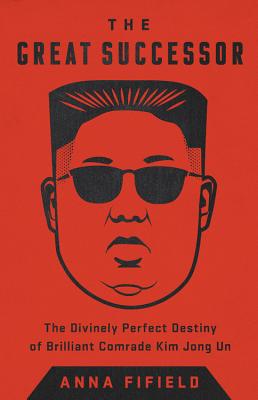 The behind-the-scenes story of the rise and reign of the world's strangest and most elusive tyrant, Kim Jong Un, by the journalist with the best connections and insights into the bizarrely dangerous world of North Korea.
Since his birth in 1984, Kim Jong Un has been swaddled in myth and propaganda, from the plainly silly -- he could supposedly drive a car at the age of three -- to the grimly bloody stories of family members who perished at his command.
Anna Fifield reconstructs Kim's past and present with exclusive access to sources near him and brings her unique understanding to explain the dynastic mission of the Kim family in North Korea. The archaic notion of despotic family rule matches the almost medieval hardship the country has suffered under the Kims. Few people thought that a young, untested, unhealthy, Swiss-educated basketball fanatic could hold together a country that should have fallen apart years ago. But Kim Jong Un has not just survived, he has thrived, abetted by the approval of Donald Trump and diplomacy's weirdest bromance.
Skeptical yet insightful, Fifield creates a captivating portrait of the oddest and most secretive political regime in the world -- one that is isolated yet internationally relevant, bankrupt yet in possession of nuclear weapons -- and its ruler, the self-proclaimed Beloved and Respected Leader, Kim Jong Un.

"There is, quite simply, no journalist in any language who has done more to unearth and tell the astounding story of Kim Jong Un than Anna Fifield. The Great Successor slashes through myths to yield the first essential and vivid biography of the man and his era."—Evan Osnos, author of Age of Ambition: Chasing Fortune, Truth, and Faith in the New China

"Anna Fifield owns the North Korea story today in a way
that few other journalists, myself included, have ever been able to claim
mastery over this most elusive subject."—Barbara Demick, author of the bestselling Nothing to Envy

"Intelligent, insightful, sometimes comic, and also worrying: Anna Fifield has written a vivid, compelling, and, above all, illuminating portrait of a rogue family's rule over the world's most reclusive nation."—General David Petraeus (US Army, Ret.), director of the CIA when Kim Jong Un became leader

"With a journalist's eye for detail and with the gift of a storyteller, Anna Fifield has written the quintessential bible on Kim Jong Un. No one working to solve the North Korean puzzle should let The Great Successor sit on a bookshelf; it's a must-read."—Ambassador Wendy R. Sherman, former undersecretary of state for political affairs and author of Not for the Faint of Heart: Lessons in Courage, Power, and Persistence

"An important, riveting, and detailed account of the rise of Kim Jong Un. Anna Fifield, who is an intrepid reporter and a lively writer, breaks important new ground in The Great Successor. Drawing on a broad array of sources, including remarkable defector accounts, she paints a disturbing portrait of a country fueled by heady delusions of military strength; a potent, bizarre ideology; an unflinching devotion to nuclear weapons; and a disturbing addiction to crystal methamphetamine. Spoiler alert: be prepared for a lot of gore."—Evans J.R. Revere, senior advisor with the Albright Stonebridge Group and former senior state department official with 50 years of experience working on Korea

"I loved reading Anna Fifield when she had the Korea beat for the Post, and now she has outdone herself with the first English language biography of the most opaque and mysterious leader in the world. Carefully crafted from her reporting with additional research, field work, and exclusive interviews with those close to and in the Kim family, The Great Successor peels back the layers to reveal Kim Jong Un's psyche and the ominous future of the country over which he presides. A must read for the general and expert reader!"—Victor Cha, Korea chair at the Center for International and Strategic Studies and author of The Impossible State: North Korea, Past and Future

"The Great Successor shows how a pudgy young heir to tyranny-using fratricide, nuclear terror, crony capitalism, and strategic flattery of a vain American president-has become a sure-footed Machiavelli for the twenty-first century. In this devastating portrait of the latest dictator named Kim, Anna Fifield expertly dissects North Korea's first family of despotism."—Blaine Harden, author of Escape from Camp 14: One Man's Remarkable Odyssey from North Korea to Freedom in the West

"The Great Successor is a tour de force of reporting. Anna Fifield has penetrated the secrecy and myths surrounding Kim Jong Un to provide a remarkable, multi-layered portrait of North Korea's youthful and enigmatic leader. The ruler depicted in this book, which is based on Fifield's interviews with an impressive range of people who have had contact with Kim or experience inside his system, plus insights gleaned from her own travel as a journalist in North Korea, is not the bomb-throwing 'rocket man' so often mocked and caricatured. Instead, Kim Jong Un comes across as smart, ruthless, diplomatically savvy, and determined to survive at all costs. An essential guide to understanding the man who could well be in charge of North Korea for decades."—Mike Chinoy, former CNN senior Asia correspondent and author of Meltdown: The Inside Story of the North Korean Nuclear Crisis

"A vivid portrait of an ambitious, paranoid young dictator."—AXIOS

"Impeccably researched. The prose is lively. Ms. Fifield writes with wit and dark humor about a murderous and increasingly dangerous dictator...This book provides a valuable perspective on this formidable adversary and one of our most vexing foreign-policy challenges."—HR McMaster, the Wall Street Journal

"I'm in awe of the author's devotion to the people searching for freedom."—Thae Yong Ho, North Korean Deputy Ambassador to the United Kingdom, who defected in 2016

"More than a biography; The Great Successor is also an important portrait of a nation that will present enormous challenges to the world."—Nicholas Kristof, New York Times

"Fun to read.... The Great Successor brims with important and exclusive information"—Financial Times

"North Korea watchers will walk away from The Great Successor with a fuller picture of a changing North Korea and its people, as well as a rich tapestry of interesting anecdotes about the young leader's life. More casual observers, in turn, could not ask for a better introduction to an enigmatic country and its curious leadership."—NK News

"The Great Successor is essential reading for anyone seeking insight on one of the world's least-understood leaders."—Washington Post

"Gripping....Fifield weaves the story skillfully....Throughout, she peppers her brisk narrative with just the right dose of humor, irony and cynicism."—Japan Times

"The veteran Washington Post correspondent has produced a macabre portrait of a ruling dynasty that has inexplicably survived for seven decades."—Los Angeles Times

"Anna Fifield's The Great Successor is elegantly written and exhaustively researched. Fifield tracks down everyone outside North Korea who has met Kim, from school friends to servants to family members in hiding under false names...The story Fifield tells, as befits the supreme ruler of a bizarrely unique country, is vivid to say the least."—The Guardian

"So refreshing...[Fifield] has collated what is probably the current maximum of what can be known about the leader of a secretive, nuclear-armed state...In an environment where the US debate over North Korea is most often defined by hysterics and saber-rattling, a balanced account like Fifield's is crucial."—Jacobin Magazine

"Anna Fifield sheds new light on North Korea's leader in her biography of the absolute dictator...putting pretty much all the currently available information between the covers of a single book represents a welcome contribution to the literature."—Bradley K. Martin, author of Under the Loving Care of the Fatherly Leader: North Korea and the Kim Dynasty

"Anna Fifield sheds new light on North Korea's leader in her biography of the absolute dictator...putting pretty much all the currently available information between the covers of a single book represents a welcome contribution to the literature."
—Brad Martin, Asia Times

Anna Fifield is the Beijing bureau chief for TheWashington Post. She previously covered Japan and the Koreas for the Post, and was the Seoul correspondent for the Financial Times. She has reported from more than twenty countries and has visited North Korea a dozen times, becoming one of the most authoritative journalists on this impenetrable country. She was a Nieman journalism fellow at Harvard University, studying how change happens in closed societies. In 2018, she received the Shorenstein Journalism Award from Stanford University for her outstanding reporting on Asia.