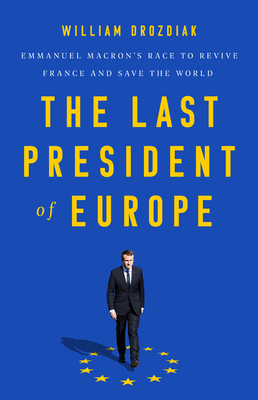 The Last President of Europe (Hardcover)

Emmanuel Macron's Race to Revive France and Save the World

A revelatory examination of the global impact of Emmanuel Macron's tumultuous presidency
A political novice leading a brand new party, in 2017 Emmanuel Macron swept away traditional political forces and emerged as president of France. Almost immediately he realized his task was not only to modernize his country but to save the EU and a crumbling international order. From the decline of NATO, to Russian interference, to the Gilets Jaunes (Yellow Vest) protestors, Macron's term unfolded against a backdrop of social conflict, clashing ambitions, and resurgent big-power rivalries.
In The Last President of Europe, William Drozdiak tells with exclusive inside access the story of Macron's presidency and the political challenges the French leader continues to face. Macron has ridden a wild rollercoaster of success and failure: he has a unique relationship with Donald Trump, a close-up view of the decline of Angela Merkel, and is both the greatest beneficiary from, and victim of, the chaos of Brexit across the Channel. He is fighting his own populist insurrection in France at the same time as he is trying to defend a system of values that once represented the West but is now under assault from all sides. Together these challenges make Macron the most consequential French leader of modern times, and perhaps the last true champion of the European ideal.

William Drozdiak is a nonresident senior fellow at The Brookings Institution's Center on the United States and Europe, and a senior advisor for Europe with McLarty Associates, an international strategic consultancy firm based in Washington, D.C. He is the author of Fractured Continent: Europe's Crises and the Fate of the West.

Drozdiak worked for two decades as a senior editor and foreign correspondent for the Washington Post. Before joining the Post, Drozdiak was the U.S. State Department correspondent for Time. He has written extensively about international relations for many other publications, including articles in Foreign Affairs, Foreign Policy, Newsweek, and The Financial Times. He divides his time between Europe and Washington, D.C.
or support indie stores by buying on
Copyright © 2020 American Booksellers Association