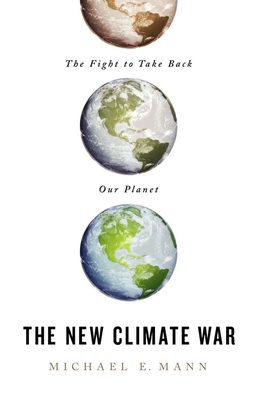 The Fight to Take Back Our Planet

Shortlisted for the FT/McKinsey Business Book of the Year award

A renowned climate scientist shows how fossil fuel companies have waged a thirty-year campaign to deflect blame and responsibility and delay action on climate change, and offers a battle plan for how we can save the planet.

Recycle. Fly less. Eat less meat. These are some of the ways that we've been told can slow climate change. But the inordinate emphasis on individual behavior is the result of a marketing campaign that has succeeded in placing the responsibility for fixing climate change squarely on the shoulders of individuals.

Fossil fuel companies have followed the example of other industries deflecting blame (think "guns don't kill people, people kill people") or greenwashing (think of the beverage industry's "Crying Indian" commercials of the 1970s). Meanwhile, they've blocked efforts to regulate or price carbon emissions, run PR campaigns aimed at discrediting viable alternatives, and have abdicated their responsibility in fixing the problem they've created. The result has been disastrous for our planet.

In The New Climate War, Mann argues that all is not lost. He draws the battle lines between the people and the polluters-fossil fuel companies, right-wing plutocrats, and petrostates. And he outlines a plan for forcing our governments and corporations to wake up and make real change, including: With immensely powerful vested interests aligned in defense of the fossil fuel status quo, the societal tipping point won't happen without the active participation of citizens everywhere aiding in the collective push forward. This book will reach, inform, and enable citizens everywhere to join this battle for our planet.


Praise For The New Climate War: The Fight to Take Back Our Planet…

“This book will no doubt prove controversial for some climate campaigners, as well as the deniers, but I hope it will be read by everybody who is engaged in making the case for action.”—The Guardian

“This book is a must read not just for people currently working to address climate change but also for those who are new to the climate fight, the latter of whom will learn much about past challenges, struggles, and attacks that have been aimed at climate champions.”—Science

“Michael Mann may or may not be a Climate Jedi, but he is a climate smart guy and The New Climate War is a must read.”—The Globe & Mail

“[Mann’s] prose rattles along, entertaining and horrifying us in equal measure as he exposes scientists, politicians, the conservative media and other supposed experts who have slowed climate action by caring more about the interests of big industry.—The New Statesman

"Fossil fuel companies have, for decades longer than I have been alive, been the largest contributors to the climate crisis that affects my generation today--all in pursuit of profits and growth. In The New Climate War, Michael Mann holds them to account, and shows us how we can take the bold steps we must all take together to win the battle to save this planet."—Greta Thunberg, climate activist

"This book takes the reader behind the front lines into the decades long information war waged by the fossil fuel industry and those that share their interests. From his perspective as a leader in the battle for scientific reason, Michael Mann provides hope and a roadmap for all of us to address the systemic issues fueling climate change, and shows how we can come together to wage a new war in the fight for our future."
—Leonardo DiCaprio, actor and environmentalist

"Few people bear more scars from the climate wars than Michael Mann--and few have fought longer and harder for a basic, rational approach to dealing with this greatest of crises. Because of his persistence--and that of so many others--we are finally making progress!"—Bill McKibben, author of Falter: Has the Human Game Begun to Play Itself Out?

"The New Climate War is an insightful treatise on how the polluting fossil fuel industry and their right-wing allies have deflected the blame for the climate crisis. The book charts a common sense course for collective actions to force government and corporations to make real solutions to the climate crisis-an existential threat to humanity and the planet."—Robert D. Bullard, Professor of Urban Planning and Environmental Policy at Texas Southern University

"With this book, Michael Mann details the challenges we face from enemies ("inactivists") both without and within while dropping critically important breadcrumbs for us to follow to lead us out of the forest of despair and set us on the path of victory in a battle we must win. We need an army of Michaels, stat!"
—Don Cheadle, actor, activist, UN global goodwill ambassador

"Pulling no punches, Michael Mann lays out our predicament and tells the shocking story of persistent climate denial and corporate deception. We are in a war for the planet, but one we are now on the verge of winning. And he deftly cuts through the propaganda and shows us the path forward."—Jerry Brown, California governor, 1975-1983, 2011-2019

"Mann shows that corporations and lobbyists have been successful in convincing us that climate change will be fine, if we just recycle our bottles and turn out the lights. Instead, he says, global warming is a problem way too hot for any one person to handle. He's optimistic though, because he sees what we really can and will do. Read his book, and let's get to work."—Bill Nye, Science Educator, CEO The Planetary Society

"For over two decades, Michael Mann has been our Janus at the gates, defending climate science from corporate-funded insinuations of confusion and suspicion. We would not have progressed this far had it not been for his unflinching and brilliant rejoinders to the traffickers of doubt. This chronicle of ongoing climate injustice may make you mad, but hopefully it will make us act. This is the only civilization we have. Mann is its resolute champion once again."—Paul Hawken, Founder, Project Drawdown

"Punchy and illuminating… a bracing read—both eye-opening and even fun."—BookPage

“Lucid, accessible and an important read for anyone who cares about the present and future of climate action.”—The Centre Daily Times

“An informed, opinionated guide to an ever-changing conflict.”—Shelf Awareness

The New Climate War is engaging, approachable, and ultimately deeply uplifting. Mann outlines a hopeful vision of the transformation we must undertake in order to create a better, brighter future on this planet. He makes the clear case that our species is capable of great change, laying out exactly why and how we can rise to overcome the grave challenges before us.”—Sasha Sagan, author of For Small Creatures Such As We

“A fascinating journey through the minds and motivations of the champions of climate denialism as well as the more recent climate doomists.  Along the way, we learn of the unequivocal scientific evidence and the rapid evolution of technological solutions. Most importantly, public opinion finally seems to be at a ‘tipping point’ to catalyze political will to leave the next generation a sustainable world – and not a moment too soon!”—Rosina Bierbaum, Professor, University of Michigan and University of Maryland, former Acting Director of OSTP

“The New Climate War is a detailed, passionate, and insightful overview of the latest schemes by fossil fuel interests and their minions to halt or delay a transition to a clean energy economy.”—The Progressive

“Mann’s book is an important addition to the pushback against inaction and doom that has delayed action against climate change for too long and led too many to surrender without even a fight.”—Sierra Club magazine

“A fascinating untangling of the intricate web of misinformation, misdirection and deflection perpetuated by the fossil fuel industry since climate change became an incontrovertible reality.”
—Earth.org

“[H]ard-hitting… the book shares an attainable approach to carbon pricing along with a look at renewable energy, discredited false narratives, and going up against the idea of doomism in regards to climate change.”—Seattle Book Review

Michael E. Mann is Distinguished Professor of Atmospheric Science at Penn State, with joint appointments in the Department of Geosciences and the Earth and Environmental Systems Institute. He has received many honors and awards, including NOAA's outstanding publication award in 2002 and selection by Scientific American as one of the fifty leading visionaries in science and technology in 2002. Additionally, he contributed, with other IPCC authors, to the award of the 2007 Nobel Peace Prize.

More recently, he received the Award for Public Engagement with Science from the American Association for the Advancement of Science in 2018 and the Climate Communication Prize from the American Geophysical Union in 2018. In 2019 he received the Tyler Prize for Environmental Achievement. In 2020 he was elected to the U.S. National Academy of Sciences. He is the author of numerous books, including Dire Predictions: Understanding Climate Change, The Hockey Stick and the Climate Wars: Dispatches from the Front Lines, and The Madhouse Effect: How Climate Change Denial is Threatening our Planet, Destroying Our Politics, and Driving Us Crazy. He lives in State College, Pennsylvania.