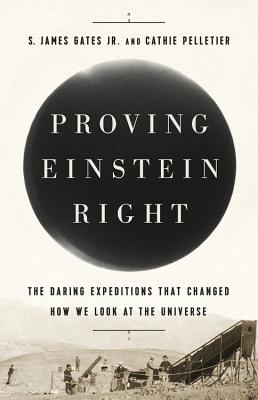 The Daring Expeditions that Changed How We Look at the Universe

A thrilling adventure story chronicling the perilous journey of the scientists who set out to prove the theory of relativity--the results of which catapulted Albert Einstein to fame and forever changed our understanding of the universe.

In 1911, a relatively unknown physicist named Albert Einstein published his preliminary theory of gravity. But it hadn't been tested. To do that, he needed a photograph of starlight as it passed the sun during a total solar eclipse. So began a nearly decade-long quest by seven determined astronomers from observatories in four countries, who traveled the world during five eclipses to capture the elusive sight. Over the years, they faced thunderstorms, the ravages of a world war, lost equipment, and local superstitions. Finally, in May of 1919, British expeditions to northern Brazil and the island of Príncipe managed to photograph the stars, confirming Einstein's theory.
At its heart, this is a story of frustration, faith, and ultimate victory--and of the scientists whose efforts helped build the framework for the big bang theory, catapulted Einstein to international fame, and shook the foundation of physics.

Praise For Proving Einstein Right: The Daring Expeditions that Changed How We Look at the Universe…

"This is a fascinating and exciting adventure tale! It chronicles the quest of eclipse-chasing astronomers who strove to test if light deflected when passing near the sun according to Einstein's theory of general relativity. Their inspiring missions depict the graceful ballet between scientific theory and experiment. In an age when we are searching for the horizons of black holes and the ripples from the origins of the universe, this book will inspire us with the ongoing excitement of understanding our cosmos."
—-Walter Isaacson, author of Einstein: His Life and Universe, Benjamin Franklin: An American Life, Steve Jobs, and Leonardo da Vinci

"With a scientist's authority and a novelist's skill, this fascinating book captures the pioneering efforts to put Einstein's theory to the test, and offers insightful portrayals of the brilliant and intrepid scientists who led the enterprise."
—Martin Rees, UK Astronomer Royal and author of On the Future

"It's all there--adventure, science, history and drama--and wonderfully told."
—Michael S. Turner, cosmologist, author of The Early Universe, and inventor of the term "dark energy"

Sylvester James "Jim" Gates, Jr. is a theoretical physicist who is most known for his work on supersymmetry, supergravity, and superstring theory. He is the Brown Theoretical Physics Center Director, Ford Foundation Professor of Physics, Affiliate Professor of Mathematics, and Faculty Fellow, Watson Institute for International Studies & Public Affairs at Brown University. In 2013, he was awarded the National Medal of Science, the highest award in the United States given to scientists. He is former president of the National Society of Black Physicists, and Vice President of the American Physical Society. He is a fellow at the American Association for the Advancement of Science and the Institute of Physics in the United Kingdom. Professor Gates gives popular-level lectures regularly and makes frequent appearances in documentaries about science.

Cathie Pelletier is the critically acclaimed author of twelve books, including The Funeral Makers, The Weight of Winter, and The One-Way Bridge. Several have been translated into numerous languages, and two have been made into films. She lives in Allagash, Maine.
Loading...
or support indie stores by buying on