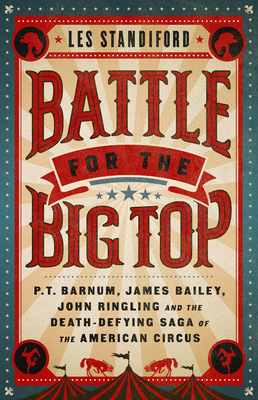 Battle for the Big Top

“Les Standiford takes us under the big top and behind the curtain in this richly researched and thoroughly engaging narrative that captures all of the entrepreneurial intrigue and spirit of the American circus.” —Gilbert King, Pulitzer Prize–winning author of Devil in the Grove

Millions have sat under the “big top,” watching as trapeze artists glide and clowns entertain, but few know the captivating stories behind the men whose creativity, ingenuity, and determination created one of our country’s most beloved pastimes.

In Battle for the Big Top, New York Times–bestselling author Les Standiford brings to life a remarkable era when three circus kings—James Bailey, P. T. Barnum, and John Ringling—all vied for control of the vastly profitable and influential American Circus. Ultimately, the rivalry of these three men resulted in the creation of an institution that would surpass all intentions and, for 147 years, hold a nation spellbound.

Filled with details of their ever-evolving showmanship, business acumen, and personal magnetism, this Ragtime-like narrative will delight and enchant circus-lovers and anyone fascinated by the American experience.

Praise For Battle for the Big Top: P.T. Barnum, James Bailey, John Ringling, and the Death-Defying Saga of the American Circus…

“Exercising his eye for exotic detail, Les Standiford gives us the charming and captivating saga of the outsized characters who dreamed, connived, and maneuvered to bring Gilded-Age America its most compelling source of entertainment—the circus. What a surprise to learn that behind all those bejeweled elephants and hair-raising acts lay a cutthroat battle to create the Greatest Show on Earth.”—Erik Larson, author of The Splendid and the Vile

“A mesmerizing, larger-than-life tale from brilliant storyteller Les Standiford--P.T. Barnum himself would tell you it's well worth the price of admission. With acrobatic grace and escalating suspense, Standiford documents the evolution of the American circus, in a masterful work of nonfiction as spell-binding as the monsters, mermaids, balletic elephants and charismatic ringleaders that fill its pages.”—Karen Russell, author of the New York Times bestseller Swamplandia!

“Battle for the Big Top is as rollicking, infectious, and enthralling as the subject it covers. With verve and style to spare, Les Standiford spins an unforgettable and addictively readable yarn about the three great showmen of the wildest of all entertainments—the American Circus. What a blast.”—Dennis Lehane, author of Mystic River and Shutter Island

“An epic work of Americana that gives you a front row seat inside the big top. Les Standiford delves deeply into the history of one of America’s favorite and oldest pastimes, examining the three dynamic men who revolutionized it.”—Brad Meltzer, bestselling author of The Lincoln Conspiracy

“Les Standiford understands that to know the American soul, one needs to understand the circus.  Ambitious, insightful and chock full of exotic lore, Battle for the Big Top goes beyond the ballyhoo and delivers the strange and fascinating history of the Greatest Show on Earth.”—Stewart O’Nan, author of The Circus Fire

"Les Standiford takes us under the big top and behind the curtain in this richly researched and thoroughly engaging narrative that captures all of the entrepreneurial intrigue and spirit of the American circus.  Fascinating and endlessly entertaining, you won't be able to put Battle for the Big Top down."—Gilbert King, Pulitzer prizewinning author of Devil in the Grove

“A blow-by-blow account of the rivalry among James Bailey, John Ringling, P.T. Barnum, and other players in the American circus world…Fans of the circuses of old, as well as students of popular culture, will enjoy this look back.”—Kirkus Reviews

Les Standiford is the author of several critically acclaimed books, including Last Train to Paradise, Meet You in Hell, and Bringing Adam Home. His book, The Man Who Invented Christmas, was a New York Times 'Editors' Choice' and was made into a feature film starring Christopher Plummer and Dan Stevens in 2018. He is a Professor of English and Founding Director of the Creative Writing Program at Florida International University and holds a MA and PhD in literature and creative writing from the University of Utah. He attended the US Air Force Academy and Columbia School of Law and is a former screenwriting fellow and graduate of the American Film Institute in Los Angeles. He lives in Miami, Florida.
Loading...
or support indie stores by buying on