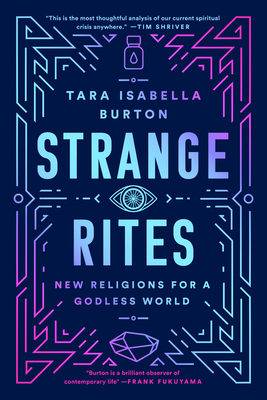 New Religions for a Godless World

A sparklingly strange odyssey through the kaleidoscope of America's new spirituality: the cults, practices, high priests and prophets of our supposedly post-religion age. Fifty-five years have passed since the cover of Time magazine proclaimed the death of God and while participation in mainstream religion has indeed plummeted, Americans have never been more spiritually busy. While rejecting traditional worship in unprecedented numbers, today's Americans are embracing a kaleidoscopic panoply of spiritual traditions, rituals, and subcultures -- from astrology and witchcraft to SoulCycle and the alt-right.As the Internet makes it ever-easier to find new "tribes," and consumer capitalism forever threatens to turn spirituality into a lifestyle brand, remarkably modern American religious culture is undergoing a revival comparable with the Great Awakenings of centuries past. Faith is experiencing not a decline but a Renaissance. Disillusioned with organized religion and political establishments alike, more and more Americans are seeking out spiritual paths driven by intuition, not institutions. In Strange Rites, religious scholar and commentator Tara Isabella Burton visits with the techno-utopians of Silicon Valley; Satanists and polyamorous communities, witches from Bushwick, wellness junkies and social justice activists and devotees of Jordan Peterson, proving Americans are not abandoning religion but remixing it. In search of the deep and the real, they are finding meaning, purpose, ritual, and communities in ever-newer, ever-stranger ways.

Praise For Strange Rites: New Religions for a Godless World…

"Burton's writing is challenging, educational, and electric, combining big-picture thinking with deep-dive immersion...Readers will come away with enlightened and altered thinking."
—Booklist

"A bracing tour through the myriad forms of bespoke spiritualism and makeshift quasireligions springing up across America."
—The Wall Street Journal

"Any good historian of religion knows that it's possible for a culture to become less and more religious at the same time--an insight that Tara Isabella Burton uses on an illuminating journey through the many unorthodox forms of faith emerging in post-religious America. With a novelist's knack for storytelling, Burton shows in scintillating detail how the unquenchable longing for connection and transcendence is merging with carnal desires and the capitalist marketplace to produce new sacred spaces and experiences of enchantment. Read Strange Rites. It's a revelation."—Damon Linker, Senior Correspondent at TheWeek

"A lesser writer and a colder intellect would have been content simply to mock the video-gaming, Soul-Cycling communicants of our "Remixed" Great Awakening. Yet in Strange Rites, Tara Isabella Burton grasps that strangeness entails ecstatic power as well as oddity, and that even folly in search of transcendent meaning merits empathy, not apathy--the difference between a merely lively read and a profound one."—Giselle Donnelley, Research fellow at the American Enterprise Institute for Public Policy Research

"Rigorously researched and reported with scholarly curiosity and an eye on the zeitgeist, Tara Isabella Burton's Strange Rites takes a hard look at what's replacing traditional religious practice in American culture today and finds that the thirst for community and belonging has not gone away. As the discovers, today's religiously remixed subcultures could indeed be tomorrow's new religions. Her book is an adventure story through the new American religious landscapes."—Kaya Oakes, UC Berkeley, author of The Nones Are Alright

"With Strange Rites, Tara Isabella Burton establishes herself as her generation's foremost chronicler of American religious life. Her intelligence, her immersive reporting, and her vivid prose style illuminate with particular intensity the radical religious changes transforming post-Christian America. The religious center has not held; Burton is an essential guide to the mere spiritual anarchy now loosed upon the Western world. Strange Rites will doubtless be one of the most important books of the year."—Rod Dreher, author of The Benedict Option

"Tara Burton is a brilliant observer of contemporary life, and in Strange Rites she explores the way that religious impulses have been transmuted into new passions, from self-care and wellness to social justice to bronze age bodybuilding in our online age."—Frank Fukuyama, author of The End of History and The Last Man

"As an evangelical Christian, the future of the American religious landscape is more than just a matter of demography or culture for me. This insightful and fascinating book helped me form categories for the religious movements I am seeing everywhere, especially among younger Americans, and sparked my imagination as to what they might mean for all of us. Strange Rites combines expert sociological insight with keen attention to the spiritual impulses behind everything from the social justice Left to the blood-and-soil Right. Tara Isabella Burton helps the reader to see the larger societal trends, along with the implications for all of us, without ever losing the human aspect of the longings of those she studies, including why so many of them no longer trust institutions. Those of us who care about religion should pay attention to this book."
—Russell Moore, president, The Ethics & Religious Liberty Commission of the Southern Baptist Convention

Tara Isabella Burton is a contributing editor at the American Interest, a columnist at Religion News Service, and the former staff religion reporter at Vox.com. She has written on religion and secularism for National Geographic, the Washington Post, the New York Times, and more, and holds a doctorate in theology from Oxford. She is also the author of the novel Social Creature (Doubleday, 2018).
Loading...
or support indie stores by buying on