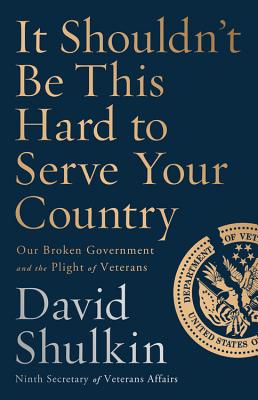 It Shouldn't Be This Hard to Serve Your Country (Hardcover)

Our Broken Government and the Plight of Veterans

The former VA secretary describes his fight to save veteran health care from partisan politics and how his efforts were ultimately derailed by a small group of unelected officials appointed by the Trump White House.
Known in health care circles for his ability to turn around ailing hospitals, Dr. David Shulkin was originally brought into government by President Obama to save the beleaguered Department of Veterans Affairs. When President Trump appointed him as secretary of the VA, Shulkin was as shocked as anyone.
Yet this surprise was trivial compared to what Shulkin encountered as secretary: a team of political appointees devoted to stopping anyone -- including the secretary himself -- who stood in the way of privatizing the agency and implementing their political agenda. In this uninhibited memoir, Shulkin opens up about why the government has long struggled to provide good medical care to military veterans and the plan he had to solve these problems. This is a book about the commitment we make to the men and women who risk their lives fighting for our country, how the VA was finally beginning to live up to it, and why the new administration may now be taking us in the wrong direction.

The Honorable David Shulkin, M.D. joined the Department of Veterans Affairs in 2015, first as Under Secretary for Health and then as the ninth Secretary of Veterans Affairs. He was the only Obama holdover who served in the Cabinet within the Trump administration and the only one unanimously confirmed by the Senate. Prior to his government service, Shulkin worked in a number of health care administration roles, including as President and CEO of New York's Beth Israel Medical Center and President of Morristown Medical Center in New Jersey. He is the Distinguished Health Policy Fellow at the University of Pennsylvania, practices internal medicine in New York City, and still advocates on behalf of veterans.

Praise For It Shouldn't Be This Hard to Serve Your Country: Our Broken Government and the Plight of Veterans…

"From the moment David Shulkin was appointed secretary of the VA, Trump's corporate henchmen put a target on his back to achieve their aim of shutting down the VA hospital system. Shulkin, the highest-ranking person to serve in both the Obama and Trump administrations, provides play-by-play detail of his tumultuous tenure and spells out the ongoing threats to the VA. A harrowing and important story."—Andy Slavitt, former acting administrator of the Centers for Medicare and Medicaid Services

"This is a very important book. I hope Americans who care about our veterans will take the time to read it. The title of the book says it all, but what's inside is a compelling story-a cautionary tale for all citizens who care about recruiting talented people to serve our government."—Bob Kerrey, former senator, former governor of Nebraska, and recipient of the Medal of Honor

"A painful-to-swallow story of a political environment gone toxic. And as Dr. Shulkin points out, the casualty isn't the loss of another government servant-it's our veterans."—General (ret.) Stanley McChrystal

"I have known Dr. David Shulkin for a decade and this book is an honest and emotional account of what he sacrificed to serve the public and how much he cares for our nation's veterans. For anyone considering public service, this book is a must-read."—Chris Christie, 55th governor of New Jersey
or
Buy Here
Copyright © 2020 American Booksellers Association