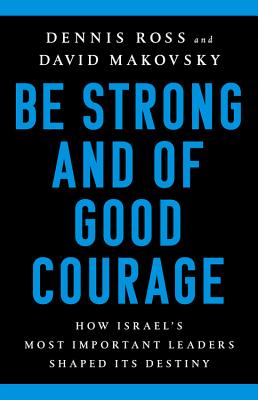 Be Strong and of Good Courage

How Israel's Most Important Leaders Shaped Its Destiny

Modern Israel's founding fathers provided some of the boldest and most principled leadership of any nation--now Israel needs their example more than ever.

Modern Israel's founding fathers provided some of the boldest and most principled leadership of any nation. Now Israel needs their example more than ever.At a time when the political destiny of Israel is more uncertain than at any moment since its modern founding, Be Strong and of Good Courage celebrates the defining generation of leaders who took on the task of safeguarding the country's future.

David Ben-Gurion, Menachem Begin, Yitzhak Rabin, and Ariel Sharon were all present at the creation of the new nation in 1948. Over the next sixty years, each experienced moments when the country's existence was directly imperiled. In those moments, Israel needed extraordinary acts of leadership and strategic judgment to secure its future, and these leaders rose to the occasion. The strength they showed allowed them to prevail.

Today, Israel may be on the verge of sacrificing the essential character that its greatest citizens fought to secure. This is the story of that epic struggle.

Praise For Be Strong and of Good Courage: How Israel's Most Important Leaders Shaped Its Destiny…

"Solid historical guidance for policymakers and students of the Israeli-Palestinian conundrum."—Kirkus Reviews

"An unusually well-written book by two seasoned American diplomatic and academic commentators...It is certainly a stimulant to shake off the cobwebs of apathy - a work that provides food for thought."—Colin Shindler, Jerusalem Post

"a subtle account of Israeli foreign policy, based in part on declassified documents from Israel, in the form of biographies of how four Israeli Prime Ministers - David Ben-Gurion, Yitzhak Rabin, Menachem Begin and Ariel Sharon - took risks for peace."—Jewish Chronicle (UK)

"For those of us who care
deeply about Israel and the US-Israel relationship, Ross and Makovsky have done
a real service. . . . They tell the story of Ben-Gurion, Begin, Rabin and
Sharon . . . [and] provide guidance for today's leaders in Israel and for all
of us on the meaning of leadership."—Hillary RodhamClinton, 67th US secretary of state

"A powerful statement on the style and
principles of leadership that are critical for shaping the Middle East peace
process."—Henry Kissinger, 56th US secretary of state

"The decisions you describe, with meticulous attention to detail and with penetrating analysis, indeed required them to exhibit leadership, strategic judgment and moral fortitude....It will make a significant contribution to my library."—Reuven (Ruvi) Rivlin President of Israel

"A brilliant study of the role of moral courage
in politics as exemplified by four of Israel's boldest prime ministers, and a
passionate plea for similar courage in Israel today."—Rabbi Lord Jonathan Sacks, former chief rabbi ofthe United Hebrew Congregations of the Commonwealth

"An astute understanding of
the policies of real leaders, along with insights based on many meetings and
close observations."—George Shultz, 60th US secretaryof state

"Be Strong and of Good Courage is of great importance to understand the most intimate decision-making process of our leaders during pivotal points of our history . . . and to learn and gain insights for Israel's future historic decisions that must be taken."—Gadi Eisenkot, 21st chief of general staff ofthe Israel Defense Forces, 2015-2019

"This book is a wake-up call to the most
difficult decision that the State of Israel has faced since its establishment:
preserving a Jewish and democratic identity or losing it. This is not a
question of if it happens, but when."—Amir Eshel, former commander of the Israeli AirForce, 2012-2017

Dennis Ross is an American diplomat and author. He has served as the Director of Policy Planning in the State Department under President George H. W. Bush, the special Middle East coordinator under President Bill Clinton, and was a special adviser for the Persian Gulf and Southwest Asia to the former Secretary of State Hillary Clinton. Ambassador Ross has published extensively on the former Soviet Union, arms control, and the greater Middle East, including most recently Doomed to Succeed: The U.S.-Israel Relationship from Truman to Obama (Farrar, Straus, and Giroux, October 2015). He has authored many op-eds in the New York Times, Washington Post, and other papers and magazines. In addition, he writes monthly columns for US News and World Report and the New York Daily News. He lives in Washington, D.C.
David Makovsky is the Ziegler distinguished fellow at The Washington Institute and director of the Project on Arab-Israel Relations. He is an adjunct professor of Middle East studies at the Johns Hopkins University's School of Advanced International Studies since 2000 and was a senior advisor on Israel-Palestinian affairs in the Office of the Secretary of State during the Obama Administration. This is his third book.
Loading...
or support indie stores by buying on