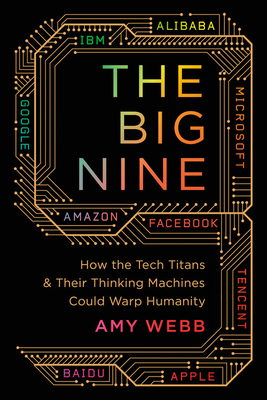 How the Tech Titans and Their Thinking Machines Could Warp Humanity

A call-to-arms about the broken nature of artificial intelligence, and the powerful corporations that are turning the human-machine relationship on its head.

We like to think that we are in control of the future of "artificial" intelligence. The reality, though, is that we -- the everyday people whose data powers AI -- aren't actually in control of anything. When, for example, we speak with Alexa, we contribute that data to a system we can't see and have no input into -- one largely free from regulation or oversight. The big nine corporations -- Amazon, Google, Facebook, Tencent, Baidu, Alibaba, Microsoft, IBM and Apple--are the new gods of AI and are short-changing our futures to reap immediate financial gain.

In this book, Amy Webb reveals the pervasive, invisible ways in which the foundations of AI -- the people working on the system, their motivations, the technology itself -- is broken. Within our lifetimes, AI will, by design, begin to behave unpredictably, thinking and acting in ways which defy human logic. The big nine corporations may be inadvertently building and enabling vast arrays of intelligent systems that don't share our motivations, desires, or hopes for the future of humanity.

Much more than a passionate, human-centered call-to-arms, this book delivers a strategy for changing course, and provides a path for liberating us from algorithmic decision-makers and powerful corporations.

Praise For The Big Nine: How the Tech Titans and Their Thinking Machines Could Warp Humanity…

"Rather than questioning the character of thinking machines, futurist Amy Webb turns a critical eye on the humans behind the computers. With AI's development overwhelmingly driven by nine tech powerhouses, she asks: Is it possible for the technology to serve the best interests of everyone?"
—Wired

"Webb's assessments are based on analyses of patent filings, policy briefings, interviews and other sources. She paints vivid pictures of how AI could benefit the average person, via precision medicine or smarter dating apps...Her forecasts are provocative and unsettlingly plausible."
—Science News

"Instead of predicting the future, Webb lays out scenarios for optimistic, pragmatic, and catastrophic outcomes -- all extrapolated from current facts. However impractical you may find the idea of a common Apple-Amazon operating system named Applezon, considering potential scenarios is a fantastically healthy exercise, because anyone who tells you they know how AI is going to turn out is lying."
—VentureBeat

"We need to get Amy Webb to campus. This is one of those cases where organizing discussions of the book would be great - but not enough. We would be wise to engage with Webb directly... We need more books like The Big Nine that are critical of higher education for reasons beyond politics (liberal bias) or costs... The Big Nine is an essential book for anyone interested in a global perspective around the role of companies and governmental policies in determining technological change."
—InsideHigherEd

"Webb is a first-rate storyteller...she has poured a lifetime of researching, writing, and conversing--in a word, thinking--into her masterwork."
—Law.com

"The Big Nine is provocative, readable, and relatable. Amy Webb demonstrates her extensive knowledge of the science driving AI and the geopolitical tensions that could result between the US and China in particular. She offers deep insights into how AI could reshape our economies and the current world order, and she details a plan to help humanity chart a better course."—AnjaManuel, Stanford University, cofounder and partner RiceHadleyGates

"The Big Nine is an important and intellectually crisp work that illuminates the promise and peril of AI. Will AI serve its three current American masters in Washington, Silicon Valley and Wall Street or will it serve the interests of the broader public? Will it concentrate or disperse economic and geopolitical power? We can thank Amy Webb for helping us understand the questions and how to arrive at answers that will better serve humanity than our current path. The Big Nine should be discussed in classrooms and boardrooms around the world."—Alec Ross, author of TheIndustries of the Future

"The Big Nine makes bold predictions regarding the future of AI. But unlike many other prognosticators, Webb sets sensationalism aside in favor of careful arguments, deep historical context, and a frightening degree of plausibility."—Jonathan Zittrain, George Bemis Professor of International Law and professorof Computer Science, Harvard University

"The Big Nine is thoughtful and provocative, taking the long view and most of all raising the right issues around AI and providing a road map for an optimistic future with AI."—Peter Schwartz, senior vice president, Salesforce.com, and author of The Art of the Long View

"Webb's
potential scenarios for specific futures are superb, providing detailed visions
for society to avoid as well as achieve."

"Her writing is very clear and accessible, and
the interesting analogies she uses to illustrate what may occur when algorithms
make decisions for us make for compelling reading. This fascinating look at how
AI will continue to revolutionize human experiences in unimaginable ways will
appeal to anyone interested in AI, human-computer interactions, and machine
learning in the private and public sectors."

PRAISE FOR THE SIGNALS ARE TALKING:
—-

"Webb teaches us to listen...[she] combines well-researched, reader-friendly insights on Google, drones and artificial intelligence with a system of questions you can bring to your next strategy meeting..."
—Chicago Tribune

"Webb provides a logical way to sift through today's onslaught of events and information to spot coming changes in your corner of the world."
—Kirkus Reviews

"Sitting somewhere between Nate Silver and The Tipping Point, Amy Webb's book provides a practical guide for leaders - at any level - in the age of Big Data, offering tools for picking out the 'true signal, a pattern that will coalesce into a trend with the potential to change everything' - and land on the right side of disruption."
—Jon Foro, The Amazon Book Review (An Amazon Best Book of December 2016)

"The clear, insightful, and humorous Amy Webb has crafted a rare treasure: a substantive guide written in a narrative that's a delight to read. While most futurologists want guru status through a few Nostradamus-like visions that never materialize, Webb modestly reports with depth and discipline, and creates a system and tools we can all use to better navigate the future. Through her deep research, specific anecdotes and brilliant insights, she has performed the selfless but hugely valuable act of teaching us all to fish at the fringe."
—Christopher J. Graves, Global Chair, Ogilvy Public Relations

"Amy Webb, with insight and a big dose of pragmatism, shows how to clearly see the next big disruption and then take action before it strikes."
—Ram Charan, advisor to CEOs and corporate Boards, author of The Attacker's Advantage and co-author of Execution: The Discipline of Getting Things Done

Amy Webb is a quantitative futurist whose research focus is on artificial intelligence and how emerging technologies will transform the way we live, work, and govern. She is the author of The Signals Are Talking: Why Today's Fringe Is Tomorrow's Mainstream, a professor of strategic foresight at the NYU Stern School of Business, and the founder of the Future Today Institute, a leading future forecasting firm that helps leaders and their organizations prepare for complex futures.