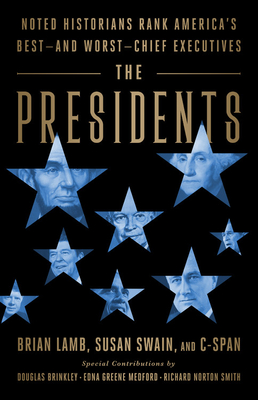 The complete rankings of our best -- and worst -- presidents, based on C-SPAN's much-cited Historians Surveys of Presidential Leadership.
Over a period of decades, C-SPAN has surveyed leading historians on the best and worst of America's presidents across a variety of categories -- their ability to persuade the public, their leadership skills, their moral authority, and more. The crucible of the presidency has forged some of the very best and very worst leaders in our national history, along with everyone in between.
Based on interviews conducted over the years with a variety of presidential biographers, this book provides not just a complete ranking of our presidents, but stories and analyses that capture the character of the men who held the office. From Abraham Lincoln's political savvy and rhetorical gifts to James Buchanan's indecisiveness, this book teaches much about what makes a great leader -- and what does not.
As America looks ahead to our next election, this book offers perspective and criteria to help us choose our next leader wisely.

"Among the pleasures of the texts are the little-known-and sometimes quirky-details about the presidents... A text that will serve both as a solid reference work and as a milepost in the evolving and ever changing reputations of our presidents."
—Kirkus Reviews

Brian Lamb is C-SPAN's founding CEO, chairman, and longtime on-camera interviewer.
Susan Swain is C-SPAN's co-CEO and, in addition to her senior management role at the network, has been an on-camera host for C-SPAN for more than thirty years, interviewing public officials, historians, and journalists for the public affairs network. The Presidents is her ninth book project with C-SPAN and PublicAffairs. She lives in the suburbs of Washington, D.C.
Loading...
or support indie stores by buying on