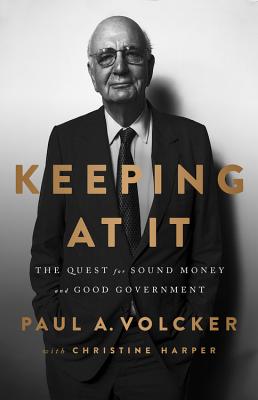 The Quest for Sound Money and Good Government

The extraordinary life story of the former chairman of the Federal Reserve, whose absolute integrity provides the inspiration we need as our constitutional system and political tradition are being tested to the breaking point.

As chairman of the Federal Reserve (1979-1987), Paul Volcker slayed the inflation dragon that was consuming the American economy and restored the world's faith in central bankers. That extraordinary feat was just one pivotal episode in a decades-long career serving six presidents.

Told with wit, humor, and down-to-earth erudition, the narrative of Volcker's career illuminates the changes that have taken place in American life, government, and the economy since World War II. He vibrantly illustrates the crises he managed alongside the world's leading politicians, central bankers, and financiers. Yet he first found his model for competent and ethical governance in his father, the town manager of Teaneck, NJ, who instilled Volcker's dedication to absolute integrity and his "three verities" of stable prices, sound finance, and good government.

Praise For Keeping At It: The Quest for Sound Money and Good Government…

"Paul Volcker is the greatest man I have known. He is endowed to the highest degree with what the Romans called virtus (virtue): moral courage, integrity, sagacity, prudence and devotion to the service of country. This book is more than an account of his life. It is his credo."—Martin Wolf, Financial Times

"If there were a Nobel Prize for government service, Paul Volcker's name would surely be on the short list...It paints an accurate personal portrait. The picture that emerges is of a man of granitic integrity, committed to what he perceives as wise policies-committed, that is, to what he calls The Verities: stable prices, sound finance, and good government...There are few people like Paul Volcker in the U.S. government today, or in business, for that matter-respected and trusted by everyone, whatever the disagreements, and motivated by public service."—Charles R. Morris, The Atlantic

"Engaging...'Keeping At It' is part autobiography, part monetary history, part plea for the restoration of trust in American political institutions...Humility is one of the charms of both the man and his book."—James Grant, Wall Street Journal

"Arguably the greatest Fed chairman all time, this book is at the top of my list."—Barry Ritholtz, Bloomberg

"Who is the most influential political figure alive? The Queen? Henry Kissinger? Donald Trump, Bill Gates or the Google founder Larry Page? Wrong. It's Paul Volcker. Some of you may not have heard of this 91-year-old American but it is hard to think of another living person who has had more influence on the world today."—Ed Conway, The Times (UK)

"Never has a message like Paul
Volcker's been more important. At a time of deep divisions in this country, his
courageous fight for America's financial and economic stability--under six
different U.S. presidents--provide a model that should unite us all."—--President Jimmy Carter

"This book is a monument
erected by a man who played a key role in the world financial affairs over more
than 50 years. Paul Volcker was the only one to master inflation in the early
'80s. He devoted himself to public service with exceptional integrity and
energy."—--Jacques de Larosiere, advisor to the chairman of BNP ParibasSA, chairman of the strategic committee of Agence France Tresor, and formerdirector of the International Monetary Fund

"Paul Volcker is an American hero who has seen more and done more to shape the world economy than anyone else over the last 50 years. His memoir Keeping at It is a must read."—--Ray Dalio, founder ofBridgewater Associates and author of Principles

" Keeping at It is a delight to read. It is the story of the long and distinguished banking career of the remarkable Paul Volcker, who has dedicated his entire adult life to building a sound central banking system for the United States and beyond. When this pillar of wisdom and integrity tells us that effective governance in the US is broken, we must listen. And those of us who care about America's future must answer Paul's call to do whatever it takes to fix it."—--John C. Bogle, founder ofThe Vanguard Group

Paul A. Volcker worked in the United States Federal Government for almost thirty years, culminating in two terms as chairman of the Board of Governors of the Federal Reserve System from 1979-1987. Earlier he served as Undersecretary of the Treasury for Monetary Affairs and president of the Federal Reserve Bank of New York.

Since leaving the Federal Reserve Mr. Volcker continued his public service: as chairman of the Volcker Alliance; as head of President Obama's Economic Recovery Advisory Board; chair of the investigation of the UN's Oil-for-Food program; and head of the committee formed by Swiss and Jewish organizations to investigate deposit accounts and other assets in Swiss banks of victims of Nazi persecution and to arrange for their disposition.

Educated at Princeton, Harvard, and the London School of Economics, Mr. Volcker was a recipient of honorary doctorates from each of his "alma maters," as well as a number of other American and foreign universities.

Christine Harper has been a financial reporter and editor for more than two decades. She is the editor of Bloomberg Markets and previously was executive editor responsible for overseeing Bloomberg News's global coverage of financial companies.
Loading...
or support indie stores by buying on