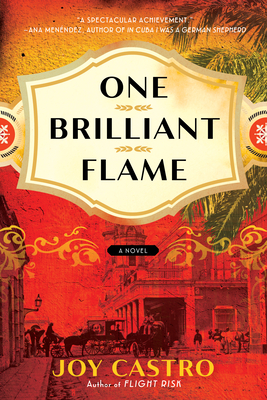 A nineteenth-century utopia becomes a powder keg of political intrigue and betrayal in an enthralling historical novel--inspired by actual events--by the author of Flight Risk.

Key West, 1886. The booming cigar industry makes it the most prosperous city in Florida. As a rebel base for the anticolonial insurgency in Cuba, it's also a tinderbox for six young friends with ambitious dreams.

They all brim with secrets: Zenaida, the daughter of an assassinated Havana journalist; power-hungry Sofia, who plots a fast track to success; Chaveta, Zenaida's loyal comrade in arms who fearlessly flouts tradition; Feliciano, a charismatic Spanish anarchist; L bano, the cafetero, silent and watchful; and Maceo, a daring guerrilla soldier who fights a brutal undertow. As lives intertwine, revolution smolders, and passions ignite, the bustling coral island is set to explode.

Against the backdrop of the Great Fire of Key West, One Brilliant Flame explores the luminous fates of consuming passion and encroaching peril in the face of insurrection, sacrifice, and inextinguishable hope.