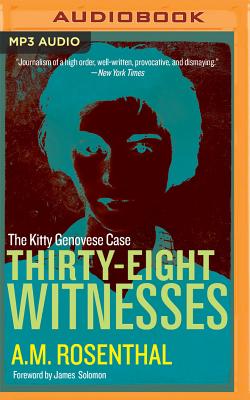 By A. M. Rosenthal, James Solomon (Foreword by), Jeff Cummings (Read by)

On March 13, 1964, Kitty Genovese was brutally beaten and murdered in the street near her apartment, in full view of more than three dozen friends and neighbors--and no one did a thing to stop it. More than thirty-five years after its first publication, Thirty-Eight Witnesses , the true account of what transpired that night in Queens, New York, continues to disturb us. We would like to think that we would step in and do what we could to stop the carnage. But not much has changed in the ensuing years, as crime goes on all around us and we do nothing to help. Pulitzer Prize-winning New York Times reporter A. M. Rosenthal covered the case for the paper as its city editor, and his chronicle of the events became this book. Part memoir, part investigative journalism, part sociological study, a disturbing story of urban apathy, Thirty-Eight Witnesses puts readers on the gritty sidewalk of the murder scene and speaks of the need for change. In the ensuing years, the case has become famous, and today in criminology classes, students learn about witnesses and the Genovese Effect. A new foreword discusses the historical legacy of the case and how little has changed in fifty-plus years.
or
Not Currently Available for Direct Purchase
Copyright © 2020 American Booksellers Association