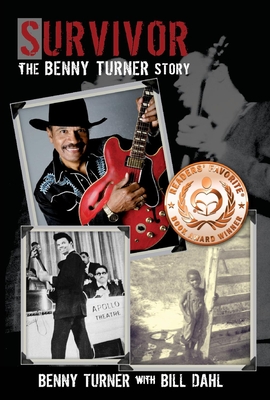 An oral history of blues legend Benny Turner, from his birth and early childhood in Gilmer, TX to the family's move to Chicago, IL and the ultimate birth of his career in the gospel, R&B and blues genres. Surviving extreme poverty in East Texas followed by the shocking transition to urban life in Chicago and then the untimely death of his big brother, bandmate and best friend Freddie King, that is only a portion of the obstacles Benny has survived. This story is a testament to the resilience of the human spirit and Benny's personal and professional triumphs along the way.

After more than 60 years in the music business, performing gospel, R&B, soul and blues everywhere from the Chitlin Circuit to the Apollo Theater to the far reaches of the globe, Benny Turner has taken his rightful place on center stage. A career sideman to iconic musicians such as Dee Clark, The Soul Stirrers, Mighty Joe Young, Marva Wright-Blues Queen of New Orleans, and his brother the late Freddie King, Benny is a new shining star in the blues world. Singer, songwriter and producer, his critically-acclaimed latest release, "When She's Gone," contains the 2016 Independent Music Awards Blues Song of the Year, "I Can't Leave." Benny's soulful singing and unique lead bass playing are both captivating and entertaining. At age 77, he continues performing and recording, and shows no signs of slowing down. He says, "I'm a survivor, and I ain't tired yet!"Lifelong Chicago resident Bill Dahl began writing about music professionally in 1977. He free-lances for many publications including Vintage Rock, Blues Music Magazine, and the Reader, and is the author of The Art of the Blues, a 2016 book published by University of Chicago Press, and 2001’s Motown: The Golden Years (Krause Publications).Bill specializes in writing liner notes for CD reissues, focusing predominantly on music of the 1950s, ‘60s, and ‘70s. He was nominated for a Grammy in 1998 as one of the liner notes writers for Rhino’s Ray Charles Genius & Soul: The 50th Anniversary Collection. He produced and compiled Bear Family’s Plug It In! Turn It Up! Electric Blues 1939-2005—The Definitive Collection!, which won the 2013 Blues Music Award for Historical Album.
Loading...
or
Not Currently Available for Direct Purchase