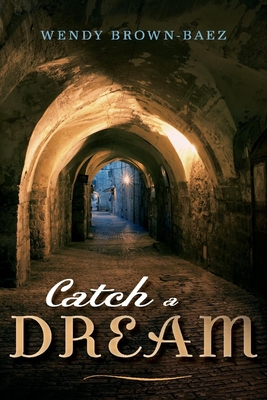 Catch a Dream takes place in Israel during the time of the first intifada in 1988 when Arabic frustration for a homeland erupted in strikes, demonstrations and suicide bombings and Israelis retaliated with arrests, house demolitions and stricter check-points. Rainbow Dove and Lily Ambrosia, traveling with their children, arrive in Haifa. On a mission to sow seeds of peace, they intend to follow in the footsteps of Jesus. They are soul sisters, single mothers and idealistic nomads, fiercely independent. Their children, four years apart, have an unusual bond. A violent incident in her past terrorizes Lily's dreams. Living on the edge of society has veiled its power to haunt her as she searches for safety and a sense of belonging. Her fascination with Jewish culture inspires her to dream she can plant roots in the Holy Land. Lily meets Levi, who is charming and enigmatic, dangerous but irresistible. Her love affair with him undermines her relationship with Rainbow Dove and they begin to go their separate ways. Lily becomes a nanny to an unusual couple: an American Jew and Israeli Arab, and enrolls her son in school. Soon she is fully immersed in Israeli daily life, from hanging out in cafes with friends to attending Yom Kippur at the synagogue. She wants to find a way to stay and considers her options of marriage or conversion to Judaism, neither of which seem realistic. A personal assault forces her to rely on her instincts, unleashes suppressed anger, and empowers her. She begins to heal from her past.At the core of the story is the tension between the dream and the reality. The hope for peace shatters in continuing violence, the hope for home is shaken by her son's rebellion and her lover's rejection. Lily's spiritual life is a tangle of beliefs and desires, impacted by Jewish culture surrounding her and yet keenly observant of the toll that constant conflict takes on the Israeli people. Can she hold onto her belief in Jesus' message of brotherly love while living according to Jewish seasons and rituals? Lily's journey to become a woman grounded in practicality rather then drifitng in idealism is honed by both heart-break and healing. The conflict around her is beginning to feel endless and war with Syria looms on the horizon. And yet she reaches out again and again for love. Will she be able to stay? What does she have to give up and what will she be able to keep?

Wendy Brown-Báez is a writer, teacher, performance poet and creator of Writing Circles for Healing Writing Workshops. Her essays Why We Write: The Wounded and Enduring appeared in Poets & Writers Magazine and Pilgrimage won the National Women Book Association 2016 contest. Wendy is the author of the poetry books Ceremonies of the Spirit and transparencies of light and has published poetry and prose in numerous literary journals, such as Borderlands, The Litchfield Review, Lavandería, Mizna, Water~Stone Review, and Peregrine anthologies such as The Chrysalis Reader, Wising Up Press, and The Heart of All That Is and in on-line journals such as Interfaithing, The Feminine Collective, Talking Writing and Duende. Wendy was awarded McKnight and MN State Arts Board grants to teach writing in non-profits. She teaches creative writing and memoir in community spaces such as schools, libraries, cafes, prisons, healing centers, churches, women’s retreats, yoga studios and arts organizations. Wendy lived in Israel for three years during the first intifada. She also lived in Mexico and Spain and has written stories and memoirs about her experiences. www.wendybrownbaez.com
Loading...
or
Not Currently Available for Direct Purchase