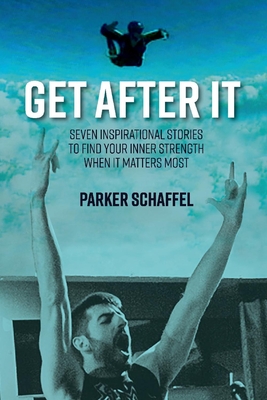 Sometimes it takes eight years to commission in the military. Other times it takes six years to admit you were wrong. And then it might take nine years to find your fit at the CIA. These are the definitive stories of the author's life, and these are the types of stories found in this book. The accounts, which span the globe from Baghdad to Afghanistan and from the headquarters of the CIA to the cockpit of an F-16, tell seven inspiring and motivational stories to give readers the drive to keep going in the toughest of times—what the author calls "getting after it." Some stories might make you cry, while others may leave you wondering "Did that really happen?" Each tale contains multiple, concrete, and applicable lessons, enabling the reader to put their newly found inspiration to practical and applicable use in their own lives.This book tells seven stories:-The author's lifelong goal was to commission in the US Air Force, like his grandfather before him. Following a successful tenure in Air Force ROTC and a selection to pilot training, the Air Force discharged him before he commissioned. Devastated but determined to not give up until he achieved his goal, it would take two more military branches, four more years, and the ups and downs in between for him to accomplish his ultimate goal of serving as a military officer.-The author's high school football coach called him a practice player, a guy unable to perform when it mattered, in front of his entire team. The sad part was that it was true. Two years later, wearing a parachute and hanging out of a US Air Force plane 5,000 feet above the ground, the author had a chance to redeem himself: make the successful parachute jump or be sent home from training. He had the choice between channeling confidence to achieve his mission or continue to be a practice player.-While being a financial planner in a suburb of Cleveland and a stockbroker on Wall Street are certainly different, they have one thing in common: incredible competition. The author tells the story of starting a new and wildly successful financial planning business from scratch and the awards, commendations, and bonuses he earned along the way. None of it seemed to matter when he found out his mother was diagnosed with cancer, forcing him to make the decision of a lifetime.-Young, immature, and lacking no self-awareness, the author flew to Afghanistan on behalf of the CIA to do a job for which he was entirely unqualified. During his short stint, he damaged friendships, severed partnerships, and created a hostile work environment. Through personal growth and reflection, this story tells of the damage the author did and how he mended fences six years later.-In February 2012, dozens of Iraqi teenagers were murdered simply because of the music they listened to or the clothes they wore. Deeply struck by this tragedy, the author, who was posted in Iraq, performed a tribute concert at the US Embassy in Baghdad—his first performance in front of other people—in remembrance of the kids. The performance started the author on a path of musical exploration, leading to more bands and eventually a solo music project, all while never forgetting the reason it all started.-Learning Arabic is extremely difficult, especially when you only get 10% of the class time as other students. Despite the odds and a head of steam, the author worked incessantly in the hopes of passing the language test, only to find out that a real-life conversation with an Arab in the Middle East mattered more than any test ever could.-In 2008, a year after starting a career at the CIA, the author met the man who's footsteps he wanted to follow. The author tried to make the switch for years, but was stymied by bureaucracy, red tape, and a trio of officers who stated they had his best interest in mind. This story tells of the nine-year journey of never giving up on pursuing the right place for him in the world's greatest intelligence organization.

Parker Schaffel hasn't done everything, but he's done a lot and definitely gets after it.He served in the US Navy, jumped out of planes more than 50 times, and ran a successful financial planning business. He spent almost two years living and serving in Iraq, Afghanistan, Bahrain, and Jordan and has visited 25 other countries across five continents. He's worked as a military intelligence analyst and at the Central Intelligence Agency and as a diplomat for the State Department. He teaches at-risk youth how to play the guitar, bass, and drums, in addition to having his own solo music career. He's dabbled in stand-up comedy, acting, and photography.He's definitely unique, not only because of his experiences, but because he's literally the only Parker Schaffel in the world. Seriously, look it up. parkerschaffel.com
Loading...
or
Not Currently Available for Direct Purchase