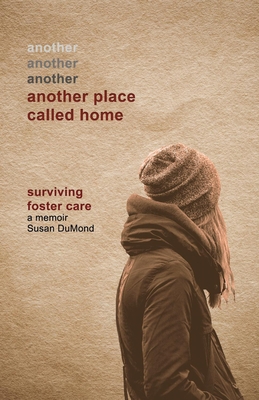 Arrive. Endure. Age out. Three challenges in the life of a foster child.

The first few hours in foster care can last a lifetime...
Taken from their broken homes, the foster care system owned them now. From the first day, the girls faced reminders that they were discards. They saw it in the cold expressions of the housemothers, the sudden empty locker in the dorm, the look of defeat when a girl lost a hastily made ally. The older ones felt it when rejected by foster parents. They were a risk to the dream of family. They longed to leave, but feared the ordeal of yet another place called home. This became the world of eleven-year-old Sue Pickering the day she was deposited in the Susquehanna Valley Orphanage.

Aging out of foster care without mentoring is like a broken promise...
A memoir in the young girl's voice, Another Place Called Home is about surviving in the youth foster care system, an almost invisible population of more than 400,000 children. Each child faces an uncertain horizon. Those who never find placement with a family will "age out" of the system, another jarring transition. They lose financial support, have no place to live, no job, trouble obtaining education and have no adult to guide them. Another Place Called Home portrays their search for strength, dignity and the desperate need for mentoring.

The story told in Another Place Called Home is real. Susan DuMond lived at the Susquehanna Valley Children's Home for six years. She arrived at age eleven and aged out at eighteen. Susan holds a BA in Liberal Arts/Theatre from Bennington College in Vermont and a PhD from the University of Oregon in Educational Policy and Management. As a technical writer and information designer, Susan has written, edited, published and collaborated on more than 25 books. Susan's poetry has appeared in a number of publications, most recently in Jefferson Journal. Published stories include "The Visit," one of the top-ten memoirs to appear in Fish Anthology 2013 (Fish Publishing, Ireland) and "Lucille's Shoes," a finalist in a WOW-WomenOnWriting flash fiction contest. Soon to be published is "Life Interrupted" in Fear and Courage (Exisle Publishing, New Zealand). The author was one of the fortunate foster care kids. She hopes her story will help increase awareness of foster care youth and their needs, particularly those who are aging out.
Loading...
or
Not Currently Available for Direct Purchase