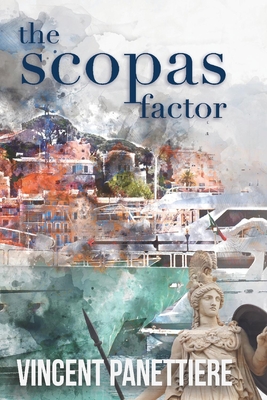 A Hmong "story cloth," a Revolutionary War battle flag, forged Picassos and a Russian drug dealer—finding the link between these disparate elements is the challenge Mike Hegan faces in The Scopas Factor, the latest mystery from Vincent Panettiere.After his last investigation ends tragically, Detective Mike Hegan returns to Chicago from St. Kitts, hoping to put everything behind him. But his girlfriend, Diana, has other plans, and although he has no interest in the job opportunity she presents him—in a small northern California town, no less—he wants to please her. Upon his arrival in Weedley, he's caught up in a kidnapping and two murders. A visit to Diana's family in San Francisco only serves to deepen the mystery, as her father might be the link to a gang of antiquities thieves that might have something to do with the crimes in Weedley. And when Diana's father disappears, Hegan takes off for Antibes in southern France, where he discovers that the mystery has only just begun.

"The Scopas Factor" is the third novel written by Vincent Panettiere. Previously he wrote the critically-acclaimed and award-winning "These Thy Gifts." It earned 5 stars from Reader's Favorite, second place in Literary and Contemporary Fiction from CIPA, and the Reviewers' Choice Award in General Fiction/Novels. His first novel was "A Woman to Blame" which featured Detective Mike Hegan, who reappears in Scopas. He has also written "The Internet Financing Illusion," a nonfiction account of the dark side of the Internet.
Loading...
or
Not Currently Available for Direct Purchase