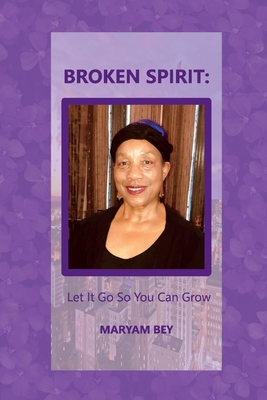 Broken Spirit:Let It Go So You Can Grow (Paperback)

May 2019 Maryam was cleaning her home and discovered the original Broken Spirit's manuscript she misplaced in 2011. She believes The Creator did not want her to complete Broken Spirit until she experienced the four agencies that made it possible for her to become a Reentry Specialist. Broken Spirit is based on miseducation in urban schools and how there is a direct relationship to poor education and mass incarceration for Black and Hispanic youth. Their educational environment must be conducive to their stages of development rather than criminalize their behaviors which ultimately leads to a potential life of crime. The importance of mental health wellness is key to their wholistic healing. The continuing racism in our country creates fear, anxiety which eventually develops into Post Traumatic Stress Disorder. My goal as the author of Broken Spirit: Let It Go So You Can Grow, is for us to discuss and focus on education and mass incarceration of Black and Hispanic students since poor education leads to incarceration and both systems are broken. There are individuals of all races who realizes we must fix this injustice. Case managers, counselors and teachers are critical to the academic advancement of inmates and students.

About the authorMaryam Bey, an Elizabeth, New Jersey resident came to Newark, New Jersey in 1967 a broken spirit fleeing from a father who raped her at fifteen years old. She dropped out of school in the twelfth grade due to pregnancy. She married and had three more children. She obtained her General Education Diploma from Steven's Institute of Technology in Hoboken, New Jersey. 1975 she started Creative Garden School with the help of her husband and four brothers. After ten years of operating her school, she closed Creative Garden due to a traumatic divorce. Maryam eventually earned two degrees in Urban Education & Public Policy from Saint Peter's University in Jersey City, New Jersey. A former Newark Public Schools Board Member and Newark Public Schools Board President. Maryam was councilwoman candidate for the West Ward twice. She has received many community, municipal and organization awards for her community activism., She is the Founder, CEO and Host of Tell a Vision, LLC, a local cable tv show. She lectures at colleges, schools, faith-based organizations as well as conduct staff trainings in reentry. She produces inspiring conferences, workshops and symposiums. She began her career in the prison system 2006 as an Employment Counselor at The Kintock Group. 2008 she was hired as a Senior/Program Counselor at Delaney Hall. 2014 she was hired for the City of Newark to work with their reentry population. 2015 - 2016 she conducted job readiness trainings for inmates at the Essex County Correctional Facility. All facilities are located in Newark, New Jersey. Maryam is passionate and loves working with brothers and sisters who are interested in their personal development. To Maryam, ATTITUDE is everything and there are NO EXCUSES.
or
Buy Here
(This book is on backorder)
Copyright © 2020 American Booksellers Association