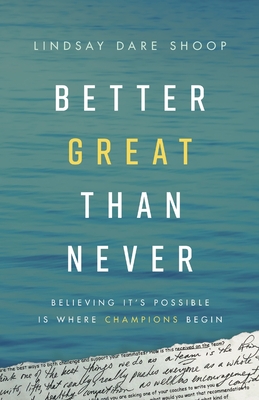 Believing It's Possible Is Where Champions Begin

Think of any sport, and Lindsay Shoop played it growing up. She was a driven athlete, good student, and happy teenager. But when she went to college, everything changed. She quit basketball, gained weight, and skipped classes. Her drive was gone.

After a sleepless night and a fateful turn of events, Lindsay made the decision to become her best self. She discovered rowing, and the sport became her outlet for transformation. In just one year she became an NCAA Division-I All-American; in four, she broke a world record and won her first World Championship. Within six years, Lindsay won Olympic gold.

In Better Great Than Never, Lindsay shows you how to seize your full potential by removing self-imposed limitations. She demonstrates how to embrace every step, good and bad, to find greatness. For Lindsay, life isn't about winning. As long as you learn throughout your journey, you can never lose.