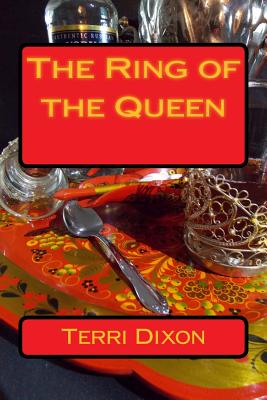 The Ring of the Queen (Paperback)

Stacey had learned a lot about Soviet History from her grandma during her life. When her grandma died and gave her a mysterious Russian looking ring, she decided that she wanted to learn more. She wanted to know about the Tsars that once ruled Russia and the ring that her grandma had given her. During her first year in college, she goes to Moscow University to take a January Term class about the Tsars. What Stacey finds out is that the ring is an ancient right to the throne of Russia and that she is the last surviving direct connection to the Romanovs. There is a Tsarist movement that wants her in power, and a President that wants her gone. This leads Stacey, her friend Tania, her teacher Steve, and the new man in her life, Peter on an adventure across western Russia. As Stacey tries desperately to exit the country and return home, she makes her way to several towns, museums, and palaces that teach her the history that she went there to learn. As the game continues, Stacey has to find a way to save the lives of her new friends, and make her way home. Will she give President Yuri Kostov the ring that her grandma left her, or will she find a way to keep her family history in tact so that she can come back and battle the corrupt President another time? The Ring of the Queen is the first book of a trilogy about a young girl and a rite of passage that will take her from her home in rural Indiana to the leader of all Russia. It's an adventure like no other, from a history like none other.

Terri Dixon is the well traveled internet writer, blogger, and photographer known as Nina Kindred. She has written over 12 stories on Fictionpress since 2004. The Ring of the Queen is her first self published full length novel. She has been writing her weekly travel blog, "Adventures for Anyone" on Blogger for five years. She has been showing and selling her photography on Cafepress, Zazzle, and Pixels for several years. When she is not traveling, writing, working, or taking photos, she is spending time with her husband and son in the Northwest Hills of Connecticut where she lives.
or
Buy Here
Copyright © 2020 American Booksellers Association