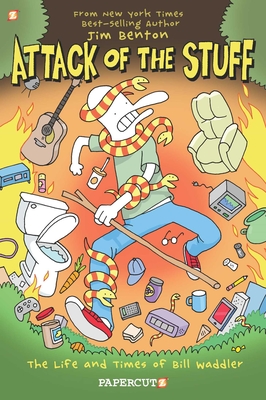 Attack of the Stuff

In what is described as “an 8 year old’s fever dream,” New York Times bestselling author introduces us to Bill Waddler. Bill is a duck who dreams of being smothered by farting snakes. He also has a special gift. He is able to hear appliances complain. Imagine what toilets would complain about. Bill doesn’t need to imagine. While working as a cash-only hay seller (that doesn’t accept credit cards) , Bill doesn’t know that he, and a very confused orange juice sales clerk, are about to save the world. If you could hear this book complain, it would be saying “where have you been all my life?”

Praise For Attack of the Stuff…

“Jim Benton is a comic genius and a brilliant cartoonist.”
– Dav Pilkey (Dog Man, Captain Underpants)
“Jim Benton has my number. Page after page made me laugh out loud. It’s all twisted and hilarious. What more could you possibly want from a book?”
-R.L.Stine (Goosebumps)
“Humor in print has many forms, what is amazing is that Jim Benton excels in all of them!”
– Sergio Aragones (MAD Magazine)
“Mr. Benton’s intellectual properties…have made him stand out in an industry dominated by big entertainment companies.”
– The Wall Street Journal
Jim Benton is the creator of thousands of original characters appearing in books, magazines, television, online — and has been hailed as “the most visible cartoonist in America”
– People Magazine
“Who could resist [Jim Benton]?”
– Publishers Weekly
” This bizarre yet sweet tale is recommended for most collections, especially where Benton is popular. “
– School Library Journal
“Suffused with ample humor—both general silliness and slapstick—this will resonate with those who like their humor in abundance alongside a hearty dose of weirdness……As fizzy and zippy as a Saturday-morning cartoon. ”
-Kirkus

Jim Benton is the creator of It’s Happy Bunny, the licensing hit that has generated over a 3/4 of a billion dollars at retail. The It’s Happy Bunny books from Scholastic have been chosen three times by the American Librarians Association as their top picks for teen readers, and It’s Happy Bunny programs have taken top awards from the Licensing Industry Merchandise Association, five times. Jim’s various series (Dear Dumb Diary, Franny K. Stein) have sold in the millions and have appeared on the New York Times Bestsellers list multiple times.
Loading...
or
Not Currently Available for Direct Purchase