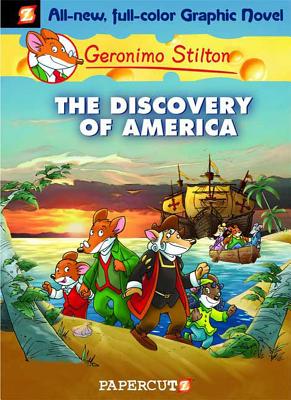 Re-presenting GERONIMO STILTON #1: "THE DISCOVERY OF AMERICA" in a specially priced format.

Get a complete graphic novel for the price of a comic book and discover ... the wonders of history with Geronimo Stilton!

Geronimo Stilton travels through time in order to defend history from his arch nemeses, the Pirate Cats. In his first time-traveling adventure, Geronimo and co. join Christopher Columbus on his voyage from Italy to America in 1492 in order to stop the Pirate cats and save all of the mice on Mouse Island.

Born in New Mouse City, Mouse Island, GERONIMO STILTON is Rattus Emeritus of Mousomorphic Literature and of Neo-Ratonic Comparative Philosophy. He is the director of The Rodent's Gazette, New Mouse City's most widely read daily newspaper. Stilton was awarded the Ratitzer Prize for his scoops on The Curse of the Cheese Pyramid and The Search for Sunken Treasure. One of his bestsellers won the 2002 eBook Award for world's best-selling electronic book. In 2006 he won a Nickelodeon Kids Choice Award and in 2008 he won the Cartoomics prize "Beyond Comics." His works have been published all over the globe. In his spare time, Mr. Stilton collects antique cheese rinds.
Loading...
or
Not Currently Available for Direct Purchase