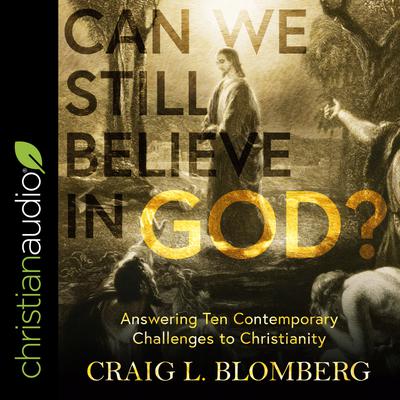 Can We Still Believe in God? (Digital Audiobook)

People regularly give certain reasons for not believing in God, but they are much less aware of what the New Testament actually teaches. Although challenges to Christianity are perennial and have frequently been addressed, they are noticeably more common today and are currently of particular interest among evangelicals.

Skeptics of Christianity often ask highly regarded biblical scholar and popular speaker Craig Blomberg how he can believe in a faith that seems so problematic. How can God allow evil and suffering? Isn't the Bible anti-women, anti-gay, and pro-slavery? Isn't the New Testament riddled with contradictions? What about the nature of hell, violence in Scripture, and prayer and predestination? Following the author's successful Can We Still Believe the Bible?, this succinct and accessible book focuses on what the New Testament teaches about ten key reasons people give for not believing in God.

Jim Denison is an AudioFile Earphones Award winner and a Society of Voice Arts and Sciences (SOVAS) Voice Arts Award nominee. He has experience as an actor on a variety of television shows and movies, appearing on Netflix, HBO, the National Geographic Channel, Investigation Discovery, and other networks, as well as appearances and voice-overs in regional and national television and radio ads.

A Florida native, he has worked and traveled in many locations within the United States and abroad. For five years he hosted religious programs broadcast from several Caribbean radio stations. He changed careers to voice-over and audiobook narration after forty years of working with Christian churches in Florida, Texas, Trinidad and Tobago, Alabama, South Carolina, Maryland, and Kentucky. Jim and his wife of over thirty-five years, Renee, currently reside in southern Indiana near Louisville, Kentucky. They have two grown daughters. He holds two master's degrees and a doctorate.