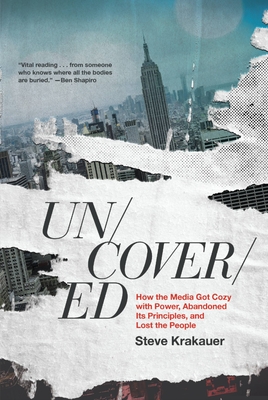 How the Media Got Cozy with Power, Abandoned Its Principles, and Lost the People

The fourth estate is supposed to be a conduit to the people and a check on power. Instead, we have a bunch of geographically isolated, introspection-free, cozy-with-power, egomaniacal journalists thirsty for elite approval.

No one understands these problems (and people) better than Steve Krakauer, one of America’s sharpest media critics. He has spent years getting to know some of the most influential players in the industry. This fascinating book is what he’s learned--and why every American should care.

In Uncovered, Krakauer gives readers an extended peek behind the curtain of the media challenges in America today. The book dives deep into some of the most important and egregious examples of the elite censorship collusion racket, like how tech suppression and media fear led to the New York Post-Hunter Biden email debacle before the 2020 election. Krakauer takes readers inside CNN after the shock Trump election, inside the New York Times after the Tom Cotton op-ed backlash, inside ESPN after the shift away from sports-only coverage, and more--revealing never-before-seen details about the press over the past five years.

Krakauer pulls from his own experience as a former CNN executive and through dozens of exclusive on-the-record interviews with media members in and around the industry--from Tucker Carlson and others at Fox News, to journalists at the New York Times, MSNBC, and CNN.

This is a rational, independent (and fun) inside look at the broken news industry in America--assessing where everything went wrong, and how to fix it. Steve Krakauer doesn't hate the media. He loves it and he wants to make it better. But it has a long way to go, and admitting the problems is the first step. In Uncovered, the long road back to trust and relevance begins.

Praise For Uncovered: How the Media Got Cozy with Power, Abandoned Its Principles, and Lost the People…

"Steve Krakauer's new book, Uncovered, is vital reading. It's the best and most perceptive deep dive into legacy media bias out there, from someone who knows where all the bodies are buried."—Ben Shapiro

"In Uncovered, Steve Krakauer brilliantly lays out exactly how the media lost its soul, its honesty, and the trust of the American people in forensic and devastating detail. An insider with a front-row seat to the decision making of some of America’s largest media outlets, Krakauer writes with authority about the corrupt and pervasive bias behind much of the news today. While Krakauer offers possible solutions, his expose leaves one seriously doubting whether this group of dishonest brokers deserves the gift of another chance."—Megyn Kelly

“Very few TV critics are smarter than the people they cover, not that it’s a high bar. But Steve Krakauer definitely is. He’s a joy to read, and so is this book.”—Tucker Carlson

"While Donald Trump's presidency was undoubtedly consequential, arguably more consequential is the subject of Steve Krakauer's superb new book: how America's leading media institutional authorities united to lie, deceive, and grab authoritarian power in the name of defeating Trump, in the process destroying their own credibility. Few people have covered these crucial events with the tenacity and insight of Krakauer, and Uncovered is the definitive account of how the U.S's once-great media brands permanently sullied and discredited themselves at the altar of a political cause they were never supposed to engage."—Glenn Greenwald, Pulitzer Prize-winning journalist

"As a journalist who strives for truth and fairness, I can count on Steve for a gut-check on how I'm doing, even if I don't always agree. My friends in the media would be smart to read this book."—Willie Geist, host of MSNBC's Morning Joe and NBC's Sunday TODAY

"Journalism was my first love, and Steve reminds me of why I fell for it in the first place. As practitioners, journalists need to keep the flame alive by being more curious, better listeners, and less anxious about likes on social media. And as citizens, we need to order more than a salad on a first date — there’s a whole buffet out there to consume. Steve is correctly concerned about the relationship between reporters and readers. He believes the relationship is worth saving and shows us how and why we should work on it."—Dana Perino, Fox News host and former White House press secretary

"Amid all the frenzied partisan media shrieking, Steve Krakauer is an important independent voice of calm reason and analysis, fighting for facts and truth in an industry mired by fake news and bias."—Piers Morgan, host of "Piers Morgan Uncensored"

"Why is the American news media struggling to maintain the trust of consumers? Steve Krakauer shows you, with first-person accounts and unmatched access. Uncovered is essential reading for the informed citizen."—Bob Ley, Sports Broadcasting Hall of Famer, former ESPN host of "Outside the Lines" and "Sportscenter"

"It’s glaringly obvious the American media is a thoroughly corrupt institution, and in Uncovered, Steve Krakauer offers keen insight into all the major problems. But what makes this book truly valuable is that his career as a media insider has left him with a key understanding of the layers of cultural and political anxieties that motivate big name journalists and media executives. The story told isn’t flattering, but unlike so much journalism these days, it’s brutally honest."—Mollie Hemingway, Editor-in-chief of The Federalist

"At a time when distrust in media is at historic highs, Steve Krakauer presents the most comprehensive argument for why this is the case. He goes straight to the source, the Acela Media elite, who turn out in one exclusive interview after another to be the unknowing witnesses to a crime perpetrated every day on the American people. Uncovered is a definitive answer to what's broken about our media, and why."—Ben Domenech, editor-at-large of The Spectator

Steve Krakauer is a journalist and media critic who has worked at CNN, Fox News, NBC and TheBlaze. He authors the Fourth Watch media newsletter, hosts the Fourth Watch Podcast, and is the executive producer of The Megyn Kelly Show. He first covered the media as a TV writer and editor at TVNewser, and Mediaite, where he was a founding editor. He lives in Dallas, with his wife and two kids.
Loading...
or support indie stores by buying on