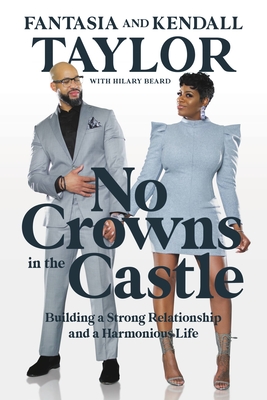 No Crowns in the Castle

Building a Strong Relationship and a Harmonious Life

A Grammy Award-winning singer and her husband share what a Godly marriage looks like and encourage readers with faith-forward and Biblical relationship advice.
​

Fantasia Taylor—American Idol, Grammy-winning vocalist, and chart-topping singer—and her husband businessman Kendall Taylor were both successful and living in their purpose when they met and married three weeks later. Their marriage has had its ups and downs, but the one thing that has sustained them through all of it is the practice of taking off their crowns—the accolades, their egos, the things the world tells you matter—and serving each other within the home. It doesn’t matter who you are in the world—you need to humble yourself and serve your partner in order to put your marriage, your family, and your faith first.

Seven years later, after facing a host of real-world challenges—from marital stress to professional and financial pressures, to their high-risk pregnancy and the premature birth of their daughter—Fantasia and Kendall’s marriage has become a beacon of hope and love as they have opened up about their lives in their weekly ‘Taylor Talks’ broadcast. Now, in their first book together, Fantasia and Kendall dish about their shared experiences and struggles, opening up about the challenges and triumphs they’ve faced together and how they have come out stronger for them. They also share stories about how they've made their relationship work against all odds and why they try to always treat each other like royalty.

In their trademark no-nonsense, real-talk style, they discuss topics that affect all relationships, including the importance of submitting to one another, handling conflict, clearing the lines of communication, keeping the romance alive, navigating the challenges of blended family, and how to maintain healthy relationships when you haven’t seen them modeled before.

Insightful, wise, and grounded in faith, Fantasia and Kendall’s story offers hope and encouragement and gives straight-up advice about making your relationships last.

Fantasia Taylor was the winner of the 3rd season of American Idol in 2004, when she was just nineteen years old. Her first single, "I Believe," debuted at number one on the Billboard 100. It was the top selling single of 2004, and went on to be certified double platinum. Since then, Fantasia has released six albums, sold over three million records, won a Grammy, three NAACP Image Awards, two ASCAP Awards, and had twelve top ten hits on the Billboard Adult R&B charts. Her debut album, Free Yourself, went on to be certified Platinum by the RIAA and earned Fantasia three Grammy nominations in 2006.

In 2007, Taylor played the part of Celie in the Broadway musical The Color Purple, and won the Theatre World Award for that performance. In 2014, she returned to Broadway in the musical After Midnight. In 2014 she was inducted into the North Carolina Music Hall of Fame. Her most recent album, SKETCHBOOK, was released in 2019.

Kendall Taylor is the President & Owner of Rock Soul Inc., an entertainment company servicing the industries of music, television, and publishing. Mr. Taylor is also the CEO of Salute1st, a Leadership & Training Academy that encourages men of all ages to shift their mindsets and perspectives to overcome the challenges associated with manhood that position them for greater levels of self-awareness and productivity in the areas of community, marketplace & entrepreneurship, and collaboration.

Kendall prides himself on being a "self-educated black man," having no formal education beyond 10th grade. He's overcome numerous obstacles in his life and remains intentional about the development of young men, regularly speaking and facilitating programs inside of prisons around the country. He also consults with small business owners seeking to redevelop or scale. He currently resides in Charlotte, NC with his wife Fantasia Taylor and their four children and two grandchildren.