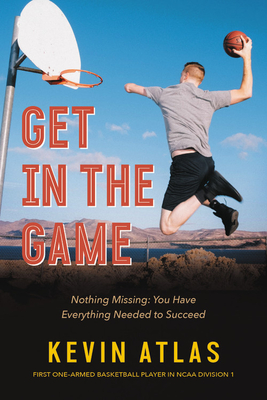 Get in the Game

Nothing Missing: You Have Everything Needed to Succeed

Be inspired by the story of Kevin Atlas (formerly Laue), whose faith and perseverance helped him become an NCAA Division I basketball player, despite being born with only one arm.
Even before entering the world, Kevin Atlas was a fighter. He should have died in childbirth, as the umbilical cord was wrapped around his neck twice, but he survived because his left arm was in the middle of it, allowing blood to flow to his brain. But since circulation was cut off in that arm, he was born with his left arm ending just below his elbow.
GET IN THE GAME is Kevin's story of transformation: Moving from anger to joy. From embarrassment to confidence. From the sidelines and wishing his life was different to getting in the game and showing who he is. Kevin's arduous journey to earning a scholarship to Manhattan College in New York City and becoming the first NCAA Division I basketball player missing a limb has given him keen insights to help anyone who feels trapped and defeated by less-than-perfect circumstances, whether physical, mental, or environmental.
Kevin doesn't encourage readers to simply accept and live with their challenges, hurts, and losses. He spurs them on to believe any weakness can, in reality, become the one thing that propels them to achieve their greatest potential. As Kevin has learned throughout his life, you can't win if you don't get in the game!

Praise For Get in the Game: Nothing Missing: You Have Everything Needed to Succeed…

Kevin's ability to overcome adversity is a testament to his character, and I admire his strong spirit and resolve. Kevin's dedicated efforts are setting a fine example for people across America.—President George W. Bush

Nearly seven-feet-tall, Kevin Atlas commands attention when he shows up as a speaker in schools, churches, and corporate boardrooms around the world. What makes Kevin's story so remarkable is that against all odds, he became the first player missing a limb to play NCAA Division I basketball.
Kevin weaves his story around the life lessons he gained from overcoming the loss of his left arm while in childbirth, the early death of his father, a challenging home environment, and a legion of skeptics to become one of the top high school basketball players in his home state of California and earn a scholarship to play at Manhattan College in New York City. He lives in Sparks, NV.
Kevin knows you can't win if you don't get in the game. In addition to his speaking company, he is an entrepreneur who has founded and partnered in numerous successful business launches.
Loading...
or support indie stores by buying on