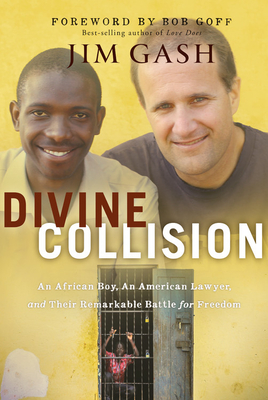 An African Boy, An American Lawyer, and Their Remarkable Battle for Freedom

Discover the compelling true story of a former L. A. lawyer and a Ugandan boy falsely accused of murder -- two courageous friends brought together by God on a mission to reform criminal justice.

Jim Gash, former Los Angeles lawyer and current president of Pepperdine University, tells the amazing story of how, after a series of God-orchestrated events, he finds himself in the heart of Africa defending a courageous Ugandan boy languishing in prison and wrongfully accused of two separate murders. Ultimately, their unlikely friendship and unrelenting persistence reforms Uganda's criminal justice system, leaving a lasting impact on hundreds of thousands of lives and revealing a relationship that supersedes circumstance, culture, and the walls we often hide behind.

Praise For Divine Collision: An African Boy, An American Lawyer, and Their Remarkable Battle for Freedom…

"Divine Collision will remind you once again how one small gesture of love can make a monumental impact on a person for eternity."—Katie Davis, New York Times bestselling author of Kisses from Katie

"Gash provides an extraordinary glimpse into the power of obedience, prayer, and hope in transforming not only one life--or even one community--but an entire justice system."
—Gary A. Haugen, President & CEO of International Justice Mission

"The story is as emotional as it is thrilling, and it reads like a major film."
—Publishers Weekly

After majoring in finance at Abilene Christian University, Jim Gash continued his education at Pepperdine University School of Law. During his first year of law school, Gash decided that his career goal would be to return to teach at Pepperdine where his passion for the law was ignited and his spiritual life was enriched by the faculty, administration, and community. As a professor, he has taught Torts, Evidence, and International Human Rights.

While at Pepperdine, he has devoted himself to advancing the rule of law in developing countries, including traveling to Uganda more than twenty times with Pepperdine students and alumni to assist that country in its justice reform efforts. Most recently, after being associate dean for strategic planning and external relations and professor of law, he has been named the eighth president and CEO of Pepperdine University, effective August 2019. Jim is married with three children and lives in Malibu, California.
Loading...
or support indie stores by buying on