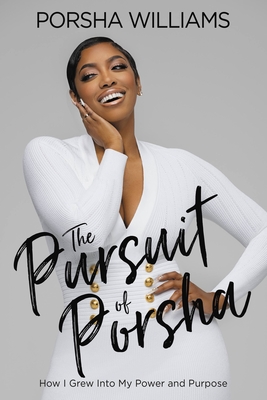 The Pursuit of Porsha

How I Grew Into My Power and Purpose

Porsha Williams, entrepreneur and one of today’s most recognizable media personalities, opens up about family, faith, fame, and becoming an agent for change.

Porsha Williams is a remarkable voice in the television and podcast communities. In The Pursuit of Porsha, she takes readers on a deeply personal journey as she searches for happiness and self-acceptance, giving fans a first-hand look into the defining moments of her life that have not been captured on-screen or in the press.

Charged with candor, vulnerability, and the sharp wit Porsha is known and loved for, The Pursuit of Porsha brings readers back to the beginning and along her path of self-reflection and discovery. She details her upbringing as the granddaughter of civil rights activist Hosea Williams and her painful recollections of childhood bullying and gives readers a look at her search for love and her journey into the spotlight. Porsha shares every moment that has tried–and restored –her faith, over and over again.

Through it all, Porsha proves that she is more than a soundbite, headline, or rumor. She is an empowering role model to black women and an icon for women everywhere. In The Pursuit of Porsha, readers will see Porsha as they have never seen her before.

Praise For The Pursuit of Porsha: How I Grew Into My Power and Purpose…

"An affecting and intimate look at the resilient woman beneath the glamour."—Publishers Weekly

A true "cornbread-fed Georgia Peach," Porsha Williams was born into a prominent and historic family in Atlanta as the granddaughter of Civil Rights leader and philanthropist, Rev. Hosea Williams. She is deeply committed to various charitable partnerships including Hosea Helps and March of Dimes, and is active in the ongoing social justice movement.

Porsha’s unscripted success includes longtime cast member of The Real Housewives of Atlanta and star and Executive Producer of the highly-rated spin-off Porsha’s Having a Baby and the upcoming Porsha’s Family Retreat, as well as competing on NBC’s The New Celebrity Apprentice. She currently co-hosts the nationally-syndicated talk show Dish Nation and the Porsha4Real podcast, and is the co-host and Executive Producer of Bravo’s late-night talk show Chat Room.

Porsha’s scripted projects include co-starring alongside Vivica A. Fox and Columbus Short in the theatrical remake of Two Can Play That Game, as well as credits in the animated feature CarGo, Sharknado 5: Global Swarming, HBO’s Insecure, Fox’s Star, and TV One’s Steppin’ Back to Love. She is also the Executive Producer of an upcoming romantic comedy.

A serial entrepreneur, Porsha is the founder of two highly successful, top-ranking businesses, Pampered By Porsha, a luxurious yet affordable sheet line, and Go Naked Hair, a high-end hair extension and wig company.

Porsha currently resides in Atlanta, Georgia with her daughter PJ & The Williams Family.