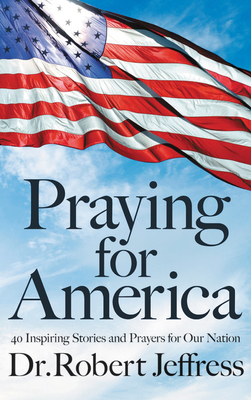 40 Inspiring Stories and Prayers for Our Nation

Discover how to pray powerful prayers for God to bless and unite America in this inspiring guide from the Senior Pastor of First Baptist Church.
The most patriotic thing you can do for America is pray for America. In times of division and disaster, our country has a long history of turning to God. Robert Jeffress, the senior pastor of a 14,000-member church in Dallas, Texas, and a Fox News contributor, believes it should be no different today. "When we seek God's help and pray about the issues that affect our lives," writes Jeffress, "we influence the fate of our families, our churches, and our nation. It has happened before in history, and it can happen again."Each chapter of this uplifting book includes an inspiring story demonstrating the power of faith in the life of our nation, a prayer, and a relevant passage of Scripture to inspire and encourage you in praying intently for our country. In these increasingly divided times, Praying for America will serve as a very necessary and timely reminder that "In God, we trust."

Dr. Robert Jeffress is Senior Pastor of the 14,000-member First Baptist Church in Dallas, Texas and a Fox News contributor. He is also an adjunct professor at Dallas Theological Seminary. Dr. Jeffress has made more than two thousand guest appearances on various radio and television programs and regularly appears on major mainstream media outlets such as Fox News channel's Fox and Friends, The O'Reilly Factor, Hannity, Lou Dobbs Tonight, Varney and Co., and Judge Jeanine; ABC's Good Morning America; and HBO's Real Time with Bill Maher.
Dr. Jeffress hosts a daily radio program, Pathway to Victory, that is heard nationwide on over 800 stations in major markets such as Dallas-Fort Worth, New York City, Chicago, Los Angeles, Washington, DC, Houston, and Seattle. His weekly television program can be seen in 195 countries and on 11,283 cable and satellite systems throughout the world, including China, and on the Trinity Broadcasting Network and Daystar.
Dr. Jeffress is the author of over twenty books, including Choosing the Extraordinary Life, When Forgiveness Doesn't Make Sense, Countdown to the Apocalypse, and Not All Roads Lead to Heaven. Dr. Jeffress recently led his congregation in the completion of a $135 million re-creation of its downtown campus. The project is the largest in modern church history and serves as a "spiritual oasis" covering 6 blocks of downtown Dallas.
Dr. Jeffress has a DMin from Southwestern Babtist Theological Seminary, a ThM from Dallas Theological Seminary, and a BS from Baylor University. In May 2010 he was awarded a Doctor of Divinity degree from Dallas Baptist University, and in June 2011 he received the Distinguished Alumnus of the Year award from Southwestern Baptist Theological Seminary.
Dr. Jeffress and his wife, Amy, have two daughters, Julia and Dorothy, and a Son-in-law, Ryan Sadler.
Loading...
or support indie stores by buying on