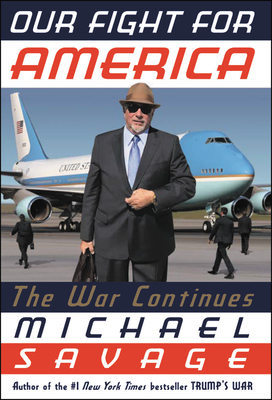 Our Fight for America

In the follow-up to the #1 New York Times bestseller Trump's War, Michael Savage makes the case for President Trump in 2020.
America rolled into 2020 like a juggernaut, with the strongest economy in its history and a renewed leadership role on the world stage. President Trump was cruising to reelection on the strength of record low unemployment, phase one of a historic trade deal, and a more stable Middle East after the defeat of ISIS.Then, catastrophe struck. A novel coronavirus originating in Wuhan, China, swept the world, taking hundreds of thousands of lives and wreaking economic and social destruction. As America battled to its feet and prepared to reopen its economy, the tragic death of George Floyd at the hands of a police officer lit a powder keg of political tension waiting to explode after months of lockdown. As the November elections approach, America is at war with itself to decide if it will remain a land of freedom and opportunity, or whether a radical new vision will emerge.Americans are searching for answers. Was the American lockdown necessary to defeat Covid-19 or was it a politically motivated strategy to harm President Trump's reelection chances? Does the death of George Floyd represent a systemic problem with American police or is the Left exploiting the tragedy for political purposes? Where does legitimate protest end and insurrection begin?A trained scientist who studied epidemiology for his PhD and one of America's most popular conservative radio hosts for the past twenty-six years, Dr. Michael Savage is uniquely positioned to answer these burning questions. In OUR FIGHT FOR AMERICA: THE WAR CONTINUES, Savage cuts through the propaganda and noise to present a clear analysis of the crises and the political and scientific motivations behind them. Michael Savage tells the truth even when nobody wants to hear it and presents a clear vision of what Americans must do to survive our most turbulent period in decades.

Michael Savage was inducted into the National Radio Hall of Fame. The SAVAGE NATION, one of America's top streaming radio shows with millions of listeners, is broadcast on over 200 stations, including KSFO and KABC, as well as the show's podcast. A multiple NEW YORK TIMES bestselling author, Dr. Savage has been profiled in the NEW YORKER, featured in the New York Times, and he has been awarded the Freedom of Speech Award from TALKERS magazine. He earned two master's degrees and a PhD in in epidemiology and nutrition sciences from the University of California at Berkeley. He lives in California.
Loading...
or
Not Currently Available for Direct Purchase