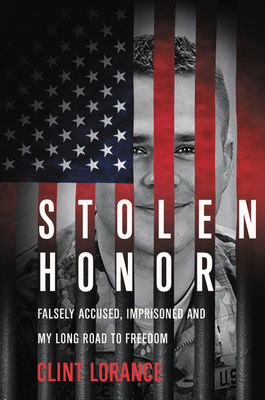 Falsely Accused, Imprisoned, and My Long Road to Freedom

The captivating account of how Clint Lorance, a soldier who became a scapegoat for a corrupt military hierarchy, was falsely charged with war crimes, imprisoned, and eventually pardoned by President Trump.
While out on patrol in Afghanistan, Clint Lorance learned that two men, both suspected suicide bombers, were speeding toward a crowded city on motorcycles. Lorance couldn't see them, but his men on the ground had clear shots. After a split second, he gave the order to shoot, killing both men.
In the months that followed, Lorance was arrested by the military and put on trial for war crimes. Prosecutors claimed that the order he gave constituted an act of premeditated murder, and they sentenced him to twenty years in prison.
In Stolen Honor, Lorance finally tells the story of this event and the trial it led to -- how the prosecutors declined to admit clear-cut evidence that would have exonerated him, how the men in his unit turned on him, and why he still believes he was right to give the order to shoot.
It is a story that stretches from small-town America to the deserts of Afghanistan, from the White House to the tiny jail cell where Lorance spent six years waiting on his exoneration, which finally came when President Trump pardoned him in 2019. The book also discusses Lorance's plans to attend law school and help reform the broken military justice system.

Clint Lorance is a former Army officer previously commissioned as a first lieutenant in the U.S. Armuy who in August 2013 was found guilty on two counts of second-degree murder for ordering soldiers in his platoon to open fire at three men on a motorcycle in southern Afghanistan in July 2012. He was fully pardoned by President Donald Trump after six years in prison at Fort Leavenworth. He lives in Florida.
Loading...
or
Not Currently Available for Direct Purchase